Six in ten consumers (60%) say they follow at least one brand a social networking site and 40% say when they interact with brands via social media they do so primarily to find coupons and special promotions, according to a survey from Empathica.

Three in ten surveyed online adults (31.5%) say they follow brands via social media to find additional information about the brand. Fewer consumers do so to communicate with the brand:

Meanwhile, women are more likely to hunt for coupons: 46.6% say when they interact with a brand via social media they're most often searching for coupons and promos, compared with 33.4% of men.

Younger consumers are even more interested in deals: 49.5% of those age 25-34 and 45.8% of those age 18-24 say they're most likely in search of coupons and promos when they interact with a brand via social media.

Below, other findings from Empathica's Consumer Insights study, based on a survey of 15,000 online US and Canadian adults.

More than seven in ten surveyed online adults (72.3%) say they use at least one social network. Gender and age play a role in brand following behavior: 64% of online women "follow" or "like" at least one brand, compared with 56% of online men.

Asked to rank the activities they perform most on social networking sites, 47.4% of consumers say their top activity is reading posts and view viewing pictures, followed by playing games (16.8%), updating their profile (12.7%), and commenting on other posts (11.8%). 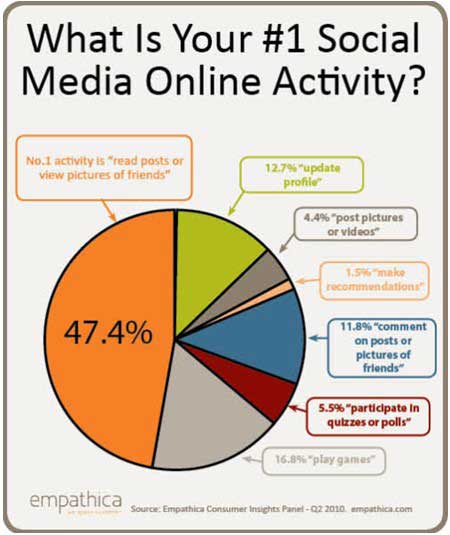 Only 1.5% of consumers say their top social media activity is making recommendations.

Trust in social recommendations is increasing: 37.5% of consumers say they have followed through at least once with a friend's recommendation received via a social networking site.

Some 31.9% of consumers say they have recommended a product or service in the previous three months.

Canadians are less likely than Americans to make recommendations via social sites: 23.9% of Canadians say they have recommended a brand, product, or service to a friend via social media in the previous three months, compared with 35% of Americans.

Not surprisingly, Americans are nearly twice as likely as Canadians to follow 10+ brands via social channels (12.9% vs. 7.7%). Moreover, 49.5% of the Canadians surveyed say they don't follow any brands at all.

Coupon Hotter Than Ever

Not only is couponing is a primary driver of social media behavior, but it drives online behavior as well, Empathica finds. Some 26.5% of all consumers say they're searching for coupons and promotions more than ever, and that level is higher among women (32.5%).

About the data: Findings are based on a survey of 15,000 North American online adults age 18+ (Americans and Canadians) in the second quarter of 2010.