Brands With Most Online Impact: Apple and Google

The Apple and Google brands had the most significant impact online in the fourth quarter of 2010, generating "impact values" of $941.5 million and $875.8 million, respectively, based on high volumes of online media buzz and social media conversation, according to a study by General Sentiment that assigns a dollar value to a brand's online exposure.

Apple led the Top 20 list for the third straight quarter, with 60.5% of its impact value created via social media conversation and an additional 12.5% via Twitter. Some 27% of Apple's impact value ($254.4 million) was generated by online news, much of it from The New York Times. 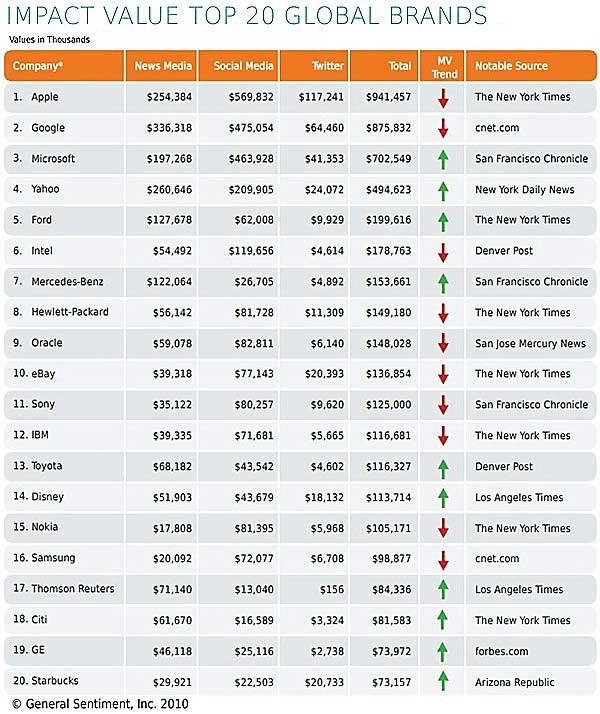 Apple's fourth-quarter lead over Google, however, shrank dramatically from 3Q10, when the brand dominated tech conversations online primarily because of problems with the iPhone 4's antenna. That media buzz helped contribute to an impact value of $1.489 billion for Apple in 3Q10 (vs. Google's $926.0 million).

Below, other findings from the Q4 2010 Global Top 20 Media Value Report.

"Perception value" differs from "impact value" in its focus on quality of exposure created, rather than quantity alone.*

The BlackBerry brand was fourth quarter's biggest winner, with a perception value of $24.1 million, up 70.3% over 3Q10. In the fourth quarter, the brand received favorable exposure from an impressive third-quarter earnings report—including record BlackBerry smartphone shipments and 40% year on year revenue growth during the period—as well as acclaim for its hotly anticipated PlayBook tablet. 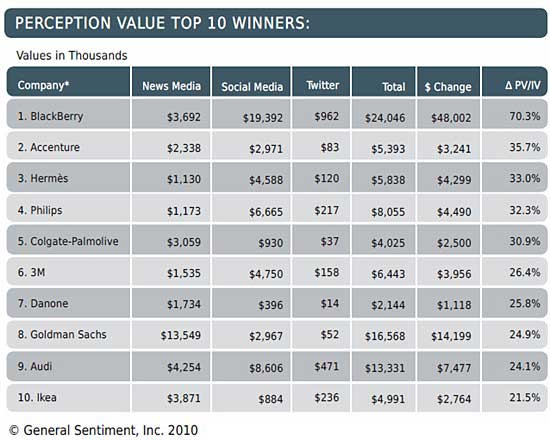 Among the quarter's biggest losers, SAP faced a mountain of bad press after losing a lawsuit to Oracle over copyright infringement. The $1.3 billion penalty set a record, and shot the world's largest maker of business software to the top of the quarter's list of biggest losers, down 44.7% from the previous quarter.

About the data: The General Sentiment Custom Media Value Report (MVR) is based on the analysis of roughly 40 million online sources tracked daily (an estimated 95-97% of US-based English language sources) from Oct 1 to Dec 31, 2010.