Although FG100 companies are reaching relatively smaller audiences with Twitter, growing numbers are using the platform more interactively, rather than simply broadcasting messages, the study found.

Below, other findings from the Burson-Marsteller Global Social Media Check-up, issued in February 2011, which explores social media use among the top 100 companies of the 2010 Fortune Global 500. 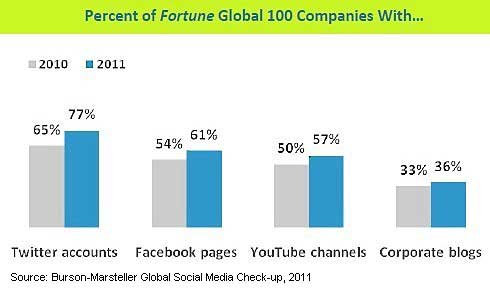 Fully one in four FG100 companies (25%) use all four platforms studied—Twitter and microblogging, Facebook and social networking, YouTube and video sharing, and blogging—up from the 20% that did so in 2010.

Although the global average for Twitter adoption is 77%, there are interesting regional variations among the FG100:

To reach a variety of stakeholders, both functional divisions and regional (office) locations among the FG100 added corporate Twitter accounts in the previous year, driving increases in accounts per company from an average of 4.2 in 2010 to 5.8 in 2011. 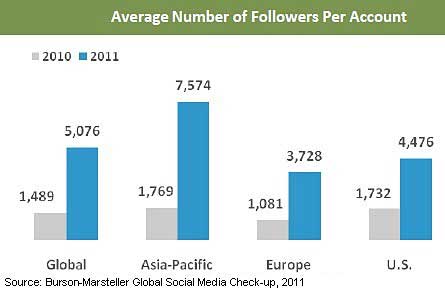 Among the FG100 using Twitter, 67% now use "@mention" to gauge brand comments or direct tweets at other Twitter accounts, up from the 38% that used the tool in 2010. 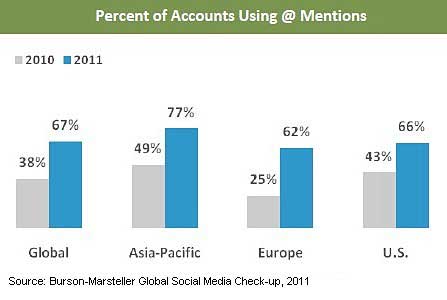 Most Twitter accounts are used to keep stakeholders informed, but customer service is also important for many brands: 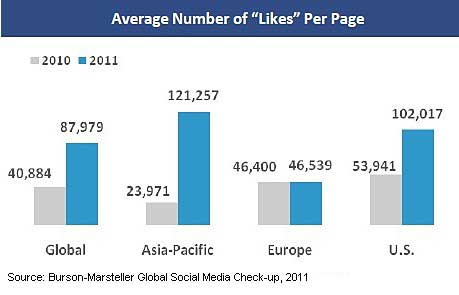 Asia-Pacific companies had the largest increase (406%) in "likes," while European companies registered relatively no change over the previous year's average.

Most Facebook pages are actively updated: 84% of FG100 Facebook pages had posts made by the companies within the previous week, up from 59% that did so in 2010.

US FG100 companies are the most interactive on Facebook:

About the data: Findings were collected from November 2010 to January 2011 based on companies' social media activity on Twitter, Facebook and a variety of other social channels.