Despite a lack of investment in marketing technologies and staffing over the past two years, many small businesses are now stepping up investments in digital channels such as social media, search, and online advertising, according to a survey from Network Solutions and the University of Maryland's Smith School of Business.

Websites are the cornerstone of digital marketing for small businesses (fewer than 100 employees), the study found: 56% of surveyed small-business owners say they have a website, up 10 percentage points (PPs) (or 21.7%) from the 46% that said so a year earlier.

Meanwhile, more small businesses are embracing social media and search to drive traffic to websites, according to the survey: 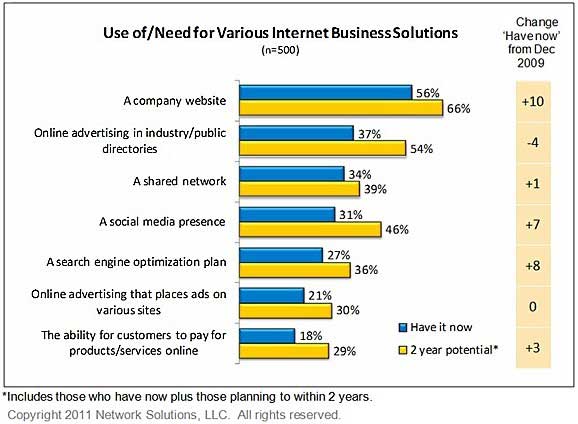 Below, other findings from the fifth wave of results from the Small Business Success Index, based on a survey of 500 small business owners.

Over the next two years, social media is expected to be the fastest growing marketing channel—with adoption levels increasing to 46%, up 15PPs (48.4%) from current levels.

Online advertising is also a key priority over the next two years:

Similarly, in two years, 36% of small businesses expect to have a search engine optimization plan, up 9PPs (33.3%) from current levels. 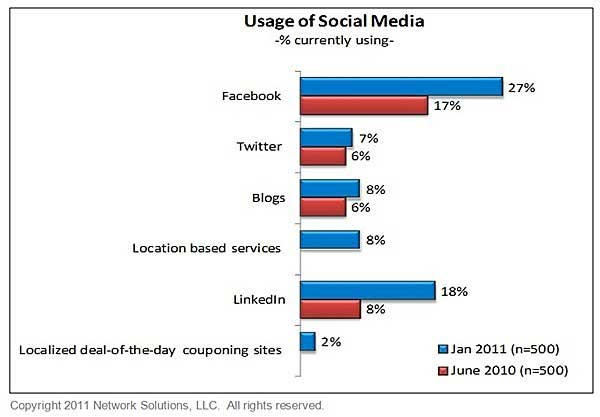 The Business Case for Social Media

Social media's role has changed over the past year: Engaging existing customers (63%) has taken on a more prominent one (up from 46% a year earlier) while attracting new customers (59%) via social media is slightly less important than in the previous year (61%). 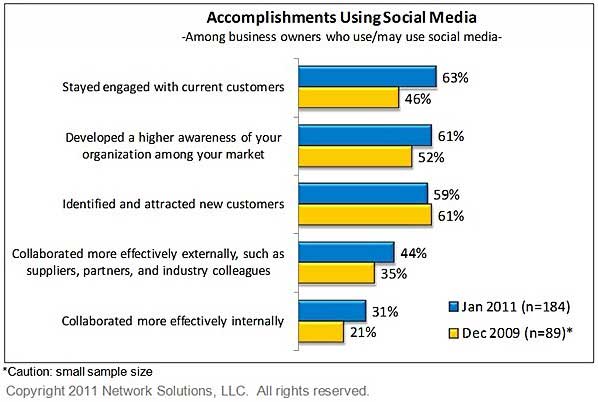 Small businesses are increasingly benefiting from stronger collaboration via social technologies—both inside (31%) and outside (44%) the organization.

Portable devices play a role in some small businesses' participation in social media:

Most small business owners are aware of various mobile marketing activities such as sending text messages to customers about promos (73%) and listing the company on location-based websites (68%), but far fewer have adopted those technologies, 9% and 19%, respectively. 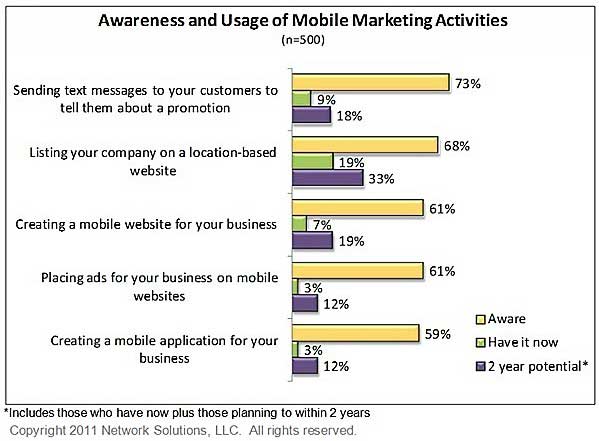 As the economy continues to recover, 28% of small businesses say they are planning to add staff in 2011, citing business expansion (73%) as the primary reason. Some 32% of small business owners say they're adding people to reduce the workloads of existing staff who are struggling to keep up.

About the data: The survey of 500 small US business owners (fewer than 100 employees) was conducted by Network Solutions and the University of Maryland's Smith School of Business in January 2011. Small businesses included in the study were privately owned (not publicly traded), for-profits with fewer than 100 employees, and had a payroll or contributed to at least 50% of the owner's household income.