iPhone, iPad Users Most Likely to Click on Mobile Ads

Mobile ads served to Apple's iOS deliver higher click-through rate (CTR) than those served to other smartphone operating systems, outperforming ads served to Google Android phones by more than 2.5 times, according to a study by MediaMind.

Ads served to Apple iPhones generate CTRs of 0.37% on average, compared with 0.14% for Android devices and 0.07% for BlackBerry devices, the study found. 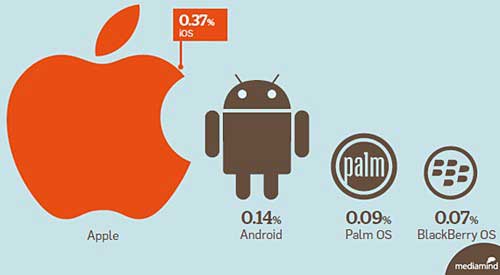 Whereas PC browsing peaks during business hours, from 9 am to 5 pm, mobile browsing soars during the evenings, similar to prime-time TV: Users are most likely to click on mobile ads from 7 pm to midnight, with ad CTRs peaking at roughly 8 pm (1.15%):

Though mobile CTR reaches its peak during the evening, mobile still maintains a higher CTR than PC browser-based banners at any time of the day.

Across various industries, the medical retail (1.31%) and entertainment (1.04%) verticals achieve the highest CTR on average, 1.31% and 1.04%, respectively, whereas the news/media and electronics verticals generate lower CTRs, 0.47% and 0.19%, respectively.

About the data: For this study, MediaMind reviewed more than 230 million mobile impressions from 4Q10 to 1Q11.