Total measured advertising expenditures reached $71.5 billion in the first six months of 2011, up 3.2% from the same period one year earlier, according to data released Kantar Media.

Spending growth eased slightly during the second quarter, reaching $36.5 billion, up 2.8% from a year earlier.

"Advertising grew at a slower rate in the second quarter, contributing to speculation about the durability of an advertising recovery that is into its second year," said Jon Swallen, SVP Research at Kantar Media North America. "Key ad spend indicators are painting a mixed picture. On one hand, a majority of media types actually improved their performance from Q1 to Q2."

"On the other, spending growth for the top 100 advertisers stalled in Q2 and the ad market became more dependent on the comparatively smaller budgets of mid-sized advertisers as the main source of growth."

Below, measured ad expenditure-related data and analysis from Kantar Media. 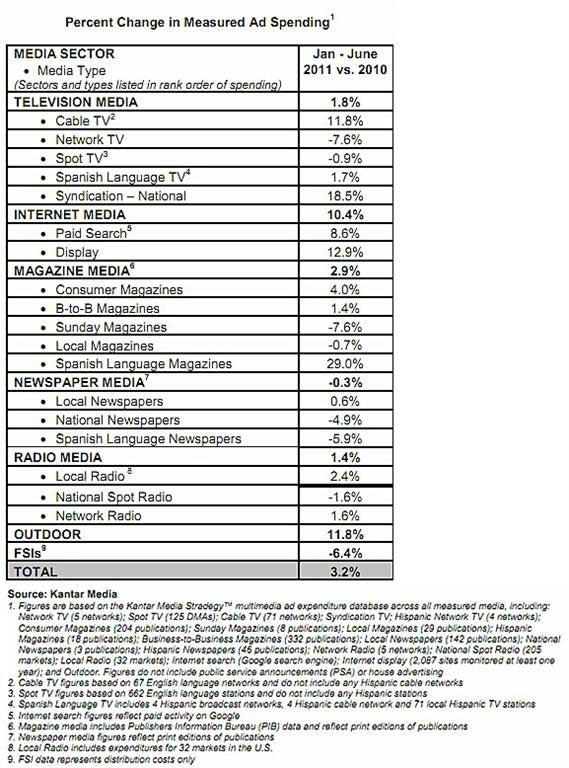 Among key media sectors in the first half of 2011: 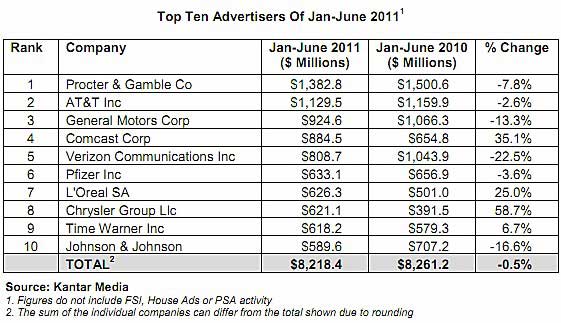 The top ten TV advertisers spent $5,165.5 million in the medium during the first half of 2011, down 1.7% percent from a year earlier. The top 10 group accounted for 15.7% of total TV expenditures by all advertisers: 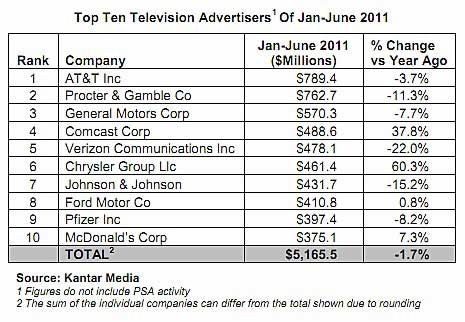 The 10 largest Internet advertisers invested some $1,323.5 million in search and display campaigns, up 24.9% from one year earlier. Despite fragmentation on the Web, the group accounted for 11.1% of all Internet ad dollars. The three leading wireless telecom providers each made the list along with two financial advertisers: 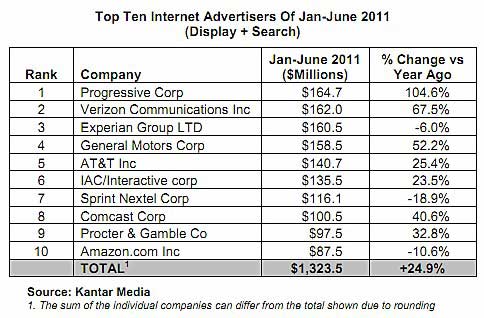 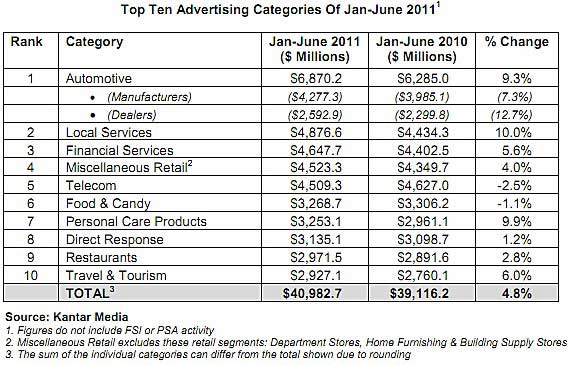 Among the ad categories in 1H11:

*For the first time, this quarterly report from Kantar Media includes paid search advertising expenditures. Search advertising has been incorporated on a like-for-like basis for 2011 and 2010 time periods.

Note: Kantar Media monitors branded entertainment within network prime time and late night programming. The tracking identifies brand appearances and measures their duration and attributes. Given the short length of many brand appearances, duration is a more relevant metric than a count of occurrences for quantifying and comparing the gross amount of brand activity that viewers are potentially exposed to in the program versus the commercial breaks.