Prospective technology buyers who consume whitepapers and other types of tech content say they perceive marketing collateral to be more influential when it displays a social sharing option, or when audio or video content is embedded within it, according to a survey from Eccolo Media.

As the variety of content formats expands, new features such the "share this" button hold increasing sway in the tech marketplace.

More than one-half of surveyed senior tech buyers say they have encountered social sharing buttons; among those buyers, three in four say they perceive collateral as much more influential (28%) or somewhat more influential (49%) if they are given the option to share the content on a social networking site.

Only 20% say the inclusion of a social sharing option does not influence their perception of the content.

Below, additional findings from Eccolo Media's fourth annual Tech Collateral Survey based on a poll of 500 senior-level US tech buyers.

The use of collateral that includes embedded audio and video is gaining ground: 55% of tech buyers say they have consumed written collateral with embedded audio or video content, up from the 45% who said so in 2010.

Moreover, among tech buyers, the new format appears to contribute to the perceived influence of marketing collateral: 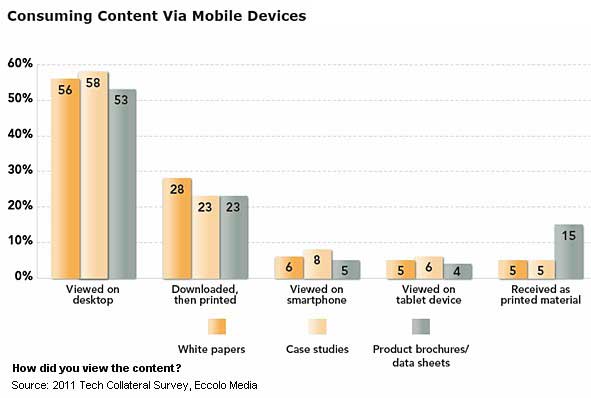 Even so, 37% of tech buyers report that have consumed B2B content via mobile device; among them, 33% reported viewing it via smartphone and 16% via tablet.

Tech buyers are consuming marketing and sales content from a much broader variety of sources during the purchasing process. Across five major collateral types, product brochures and data sheets are the most popular (72%), followed by whitepapers (62%), videos and multimedia files (58%), and case studies (50%): 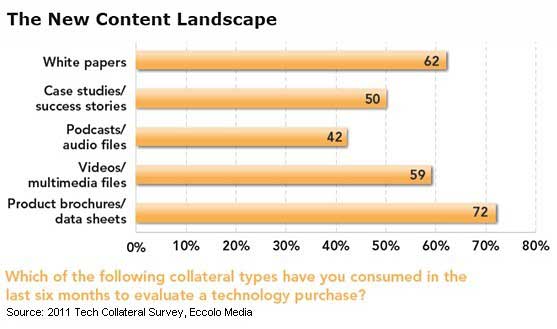 Overall, tech buyers are consuming fewer pieces of written content, the study finds, but the content they do consume is perceived as more valuable than it was in 2010. 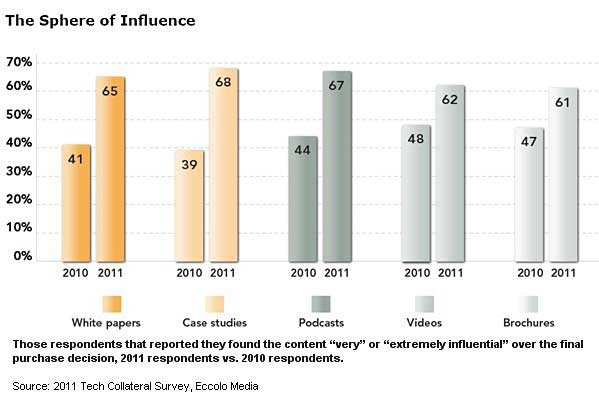 However, asked to compare the perceived influence of content types relative to one another, tech buyers still cite the whitepaper as superior to other forms of collateral.

About the data: Findings are from survey of 501 C-level executives, vice presidents , directors, managers, developers/programmers, and technicians, all working for US-based companies. Eccolo Media collaborated with Global Marketing Insite (GMI), which fielded the online survey in June 2011.