In the search-term category, Facebook took top honors for the third consecutive year, accounting for 3.10% of all searches conducted in the US, up 46% from 2010.

Among key findings related to the top 10 most-searched terms of 2011: 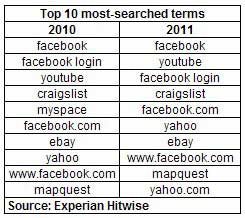 Social networking-related terms dominated the results in 2011, accounting for 4.18% of the top 50 searches, up 12% year over year (YOY). When combined, common search terms for Facebook (e.g., facebook and facebook.com) accounted for 3.48% of all searches in the US among the top 50 terms, up 33% YOY. 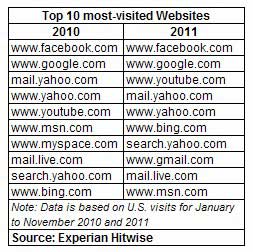 In total, the top 10 websites accounted for 32% of all US visits between January and November, roughly the same proportion recorded in 2010.

Below, top searches across various categories:

About the report: Data are based on the top 500 unfiltered US search terms and US market share of visits for January to November 2011, excluding mobile searches or mobile traffic.