Why Search Marketers Are Grabbing the Long Tail

Many marketers approach SEO by targeting the keywords in their industries with the largest monthly search volumes, but they often neglect the "long-tail" or low volume keywords, which when combined with multiple keywords can total, or exceed, the volume of the one desirable search term, according to a study by Conductor.

For example, search volumes for multiple keywords in the auto insurance industry total that of the hyper-competitive "auto insurance" query, as shown in the table below:

Focusing on multiple, less competitive search terms can generate as many visits as a single, more competitive head (short-tail) term.

Below, other findings from Conductor's study, titled "The Long Tail of Search: Why the Fastest Path to More Traffic Might Not Be Where You are Looking."

On-Page Optimization and the Long Tail

On-page optimization, the practice of optimizing on-page elements to emphasize the keyword for which a brand wants to rank, is central to moving keywords up search rankings, Conductor points out.

Moreover, among the tactics in the search marketer's toolbox, on-page optimization often has the most immediate impact on keyword visibility, according to Conductor. That's particularly so for long-tail terms because there is less competition for them in the marketplace.

The study analyzed the rank movement for thousands of keywords over a nine-month period, compiled via Conductor's Searchlight platform, which generates on-page recommendations for marketers to improve their natural search visibility. The SEO platform also tracks the rankings for the keywords and whether the on-page recommendations have been implemented.

In doing so, the system reveals the potential lift generated from on-page optimization (i.e., on-page recommendations implemented by SEO marketer) relative to keywords for which recommendations have not been followed, and keywords that have no on-page issues.

The three keywords segments are the following:

Keywords that had on-page recommendations consistently implemented had an average rank improvement of more than one full page in the search results (11.00 positions), compared with a downward movement of 2.46 positions for keywords that had issues not being resolved. 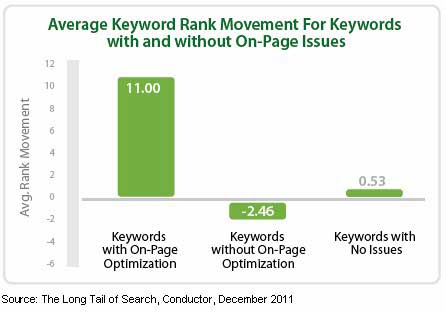 Keywords with no issues remained nearly flat with an upward movement of one-half of a position (0.53).

To highlight the lift in search ranking movement from on-page optimization activities for head terms (high-volume) vs. long-tail (low-volume) queries, keywords were segmented into representative buckets. (For the purposes of this study, medium-volume keywords were excluded to focus on keywords that best represent our head and long-tail targets.) 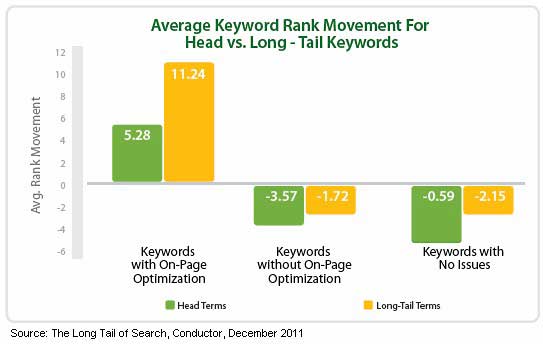 Among people in the search industry, the phrases "long tail" and "head terms" are used to refer to low volume vs. high volume terms. However, among many, the two terms are also used to describe search-term length: few words vs. multiple words.

To understand the impact of on-page auditing tactics on the alternative definition of long-tail terms (with multiple words) the data were segmented by length of query. Terms with 1-2 words were grouped into the "head terms" bucket, and those with 3+ into the "long-tail" bucket. 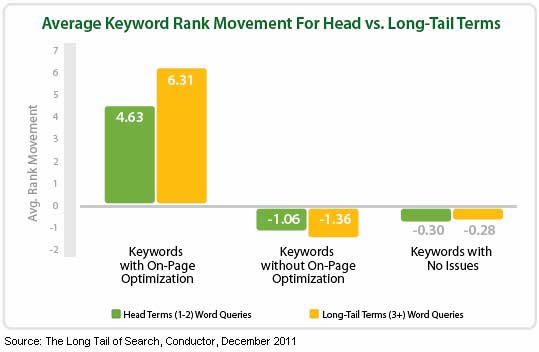 The benefit of optimizing for long-tail queries is not simply an easier climb up the search rankings, according to the study. Visitors who arrive at websites via long, more specific queries generally are farther along in the buying/conversion cycle, and will likely convert at greater rates than visitors arriving via head-term searches.

About the study: Findings are based on data gathered via Searchlight, Conductor's SEO platform, for the nine months ended August 2011.