The smartphone market is still expanding: US adoption is expected to surge from 97 million devices in 2011, to 175 million by 2015, according to Yankee's forecast.

Below, key findings from Yankee Group's report titled "The Runaway Smartphone Landscape," based on a survey of 15,000 US consumers in December 2011 and Yankee Group research.

Nearly one-half (47%) of surveyed US consumers now own at least one smartphone, and 58% of consumers plan to buy a smartphone as their next mobile device.

Apple's iOS, however, is the only platform set to gain share in the expanding market over the next six months.

The chart (below) illustrates the smartphone market over the next six month, divided into two regions based on OS ownership and intent to buy: 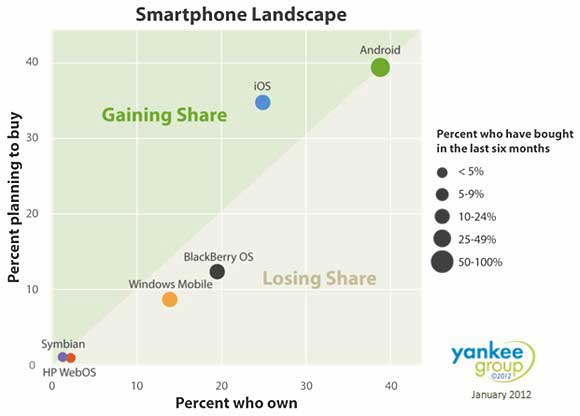 Below, key findings related to the smartphone landscape:
Meanwhile, four out of six mobile OSs are expected to lose share (any OS with less than 20% share of today's installed base can expect to do so, according to the study). Overall, only 22% of consumers who plan to buy a smartphone over the next six months plan to purchase a BlackBerry, Palm, Nokia, or Windows Mobile-based smartphone.

Among key findings related to the four platforms:

About the research: Findings are based on a survey of 15,020 US consumers age 13+, conducted in December 2011, and Yankee Group research.