After making a luxury purchase, most Americans (70.8%) "verbally tell someone" about their latest acquisition, while fully three in ten (30.3%) head to social media sites to share the news, according to a survey from Empathica.

Among luxury consumers who share information about what they buy, Facebook is the top social media destination (18.2%), followed by Twitter (5.0%), various other social sites (4.9%), and blogs (2.2%).

Overall, however, when buying luxury goods, Canadians are less likely than Americans to prefer online shopping (19.6% vs. 48.1%): 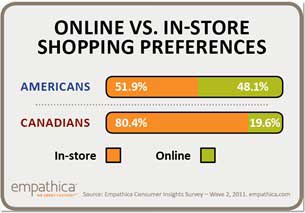 Below, other findings from Empathica's Consumer Insights Panel survey among buyers of luxury goods.

Before committing to make a luxury retail purchase, most Americans (77.1%) and Canadians (66.4%) say they spend considerable time researching products.

Americans and Canadians use multiple channels to gather shopping information, including the following:

Asked to consider how they made their most expensive purchase over the previous six months, consumers (in US and Canada combined) cited general online research (71.0%), visits to a brick-and-mortar store (57.3%), online reviews (47.8%), and speaking directly with sales associates (43.6%). 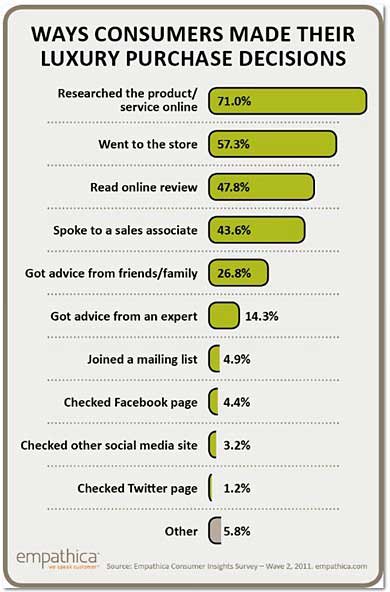 Fewer consumers checked out social media sites such as Facebook (4.4%).

Most (31.9%) consumers justify their luxury purchases as a personal reward and 17.5% say they have simply been delaying the purchase for awhile. 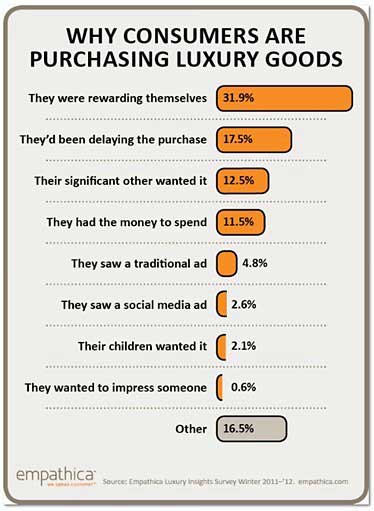 Fewer consumers are motivated to buy luxury goods because of ads they've seen, either via traditional media (4.8%) or social media (2.6%).

About the data: Findings based on a survey via the Empathica Consumer Insights Panel among more than 5,000 North Americans, Wave 2011, Issue 3, conducted during late 2011 and early 2012.