Twitter users* say only 36% of the tweets they receive are worth reading, 39% are mediocre at best, and 25% of tweets are not worth reading at all, according to a study by researchers at Carnegie Mellon University, MIT, and Georgia Tech.

Among those surveyed, Twitter content was deemed "not worth reading" for various reasons. Tweets that were part of someone else's conversation, or updates around a current mood or activity, were the most strongly disliked, whereas tweets that included questions to followers, information sharing, and self-promotion (such as links to content the writer had created) were liked more often.

Among all types of tweets analyzed, "Presence Maintenance" tweets (e.g., "Hullo twitter!") were the most strongly disliked, registering a 45% probability of being Not Worth Reading (NotWR), compared with 18% for "Question to Followers" tweets.

Presence Maintenance communications were generally considered "content-less," among those surveyed, eliciting comments such as "I have one word for one word tweets: BORING", or "useless."

The following chart shows various tweet types and respondents' attitudes toward them: 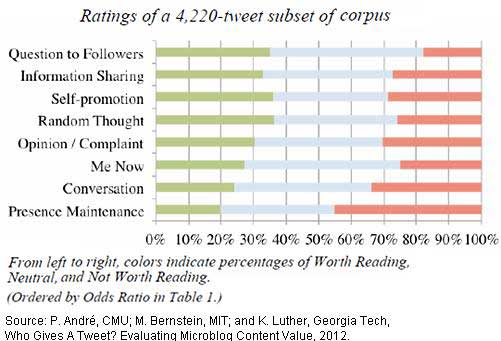 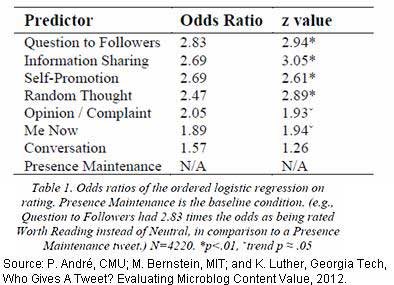 Twitter reviewers were asked to rate individual tweets as WR or Not WR; they could also qualify their rating with one of the following eight reasons: arrogant, boring, depressing, mean, funny, exciting, useful, or informative.

Being boring was a far more prevalent problem among tweets evaluated.

Boring tweets rated NotWR tended to repeat old news, were often cryptic, or used too many # and @ signs, according to study. Boredom was also associated with banal or prosaic tweets, leading to responses such as "and so what?" or "it's fine, but a bit obvious."

*Note on respondents: Many users to the site "Who Gives a Tweet?" were referred by technology-focused and business websites (e.g., TechCrunch, Mashable, and CNN), as well as a link distributed via Twitter. Though the survey sample size was substantial, the demographic of respondents is likely skewed toward those who visit such sites.

**Twitter users who visited the site were promised feedback on their tweets if they agreed to anonymously rate tweets by Twitter users they already were following.

Continue reading "What Others Like (and Dislike) About Your Tweets" ... Read the full article