Buoyed by renewed confidence in the US economy and higher expectations for new business, CMOs say they plan to boost marketing spending over the next 12 months, with B2B products and B2B services marketers leading the way, according to the CMO Survey.

Moreover, the renewed confidence among surveyed CMOs is reflected in their higher financial performance goals:

Below, additional findings from the February 2012 CMO Survey, a nationwide poll of senior marketing executives conducted biannually by The American Marketing Association and Duke University's Fuqua School of Business.

One-half of surveyed CMOs expect to win new customers over the next 12 months, and nearly two-thirds expect to benefit from higher purchase volume and cross-selling opportunities:

However, CMOs are cognizant of customers' shifting priorities: 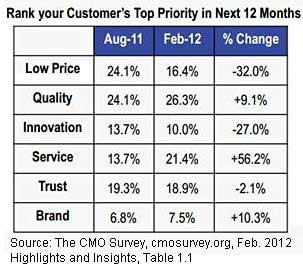 Among CMOs surveyed, marketing budgets are expected to climb 8.1% on average over the next 12 months, down from the 9.1% increase reported in August 2011: 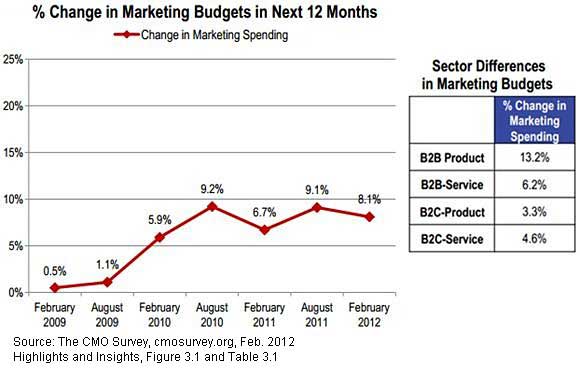 Spending on traditional advertising is expected to fall dramatically over the next 12 months, while several marketing categories grow robustly: 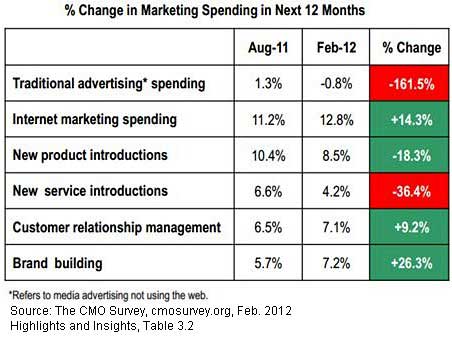 Social media marketing spend is expected to reach 10.8% of total marketing budgets over the next 12 months, up from the 10.1% forecast six months earlier.

Moreover, in the next five years, social spending is projected to account for 19.5% of total marketing budgets, almost three times more than the current level of 7.4%. 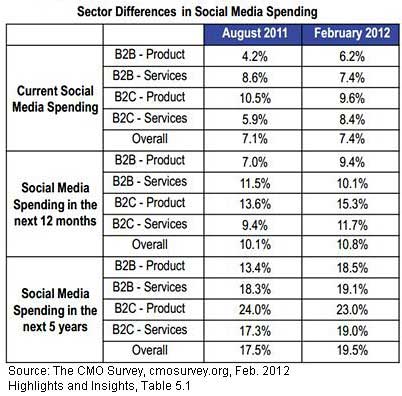 B2C brands that sell products and services are expected to invest the biggest share of their budgets in social media in 2012, 15.3% and 11.7%, respectively.

Marketing Spend as a Percentage of Total Budgets, Revenues

Rounding out the bullish sentiment, CMOs' optimism for their own companies exceeded that of the overall economy (72.8 vs. 63.4).

About the data: The February 2012 CMO Survey is a nationwide poll of chief marketing officers conducted twice each year by Duke University's Fuqua School of Business in conjunction with the American Marketing Association. The survey collected responses from 269 senior marketing executives, January 31 to February 16, 2012.