Senior executives have a healthy appetite for a wide range of traditional and new media channels, according to a survey from Doremus and the Financial Times: Most surveyed execs still read business and trade information in printed formats, but they also use digital channels—such as online video, professional networking sites, and blogs—for work.

Though the consumption of traditional media hasn't declined significantly among the executive audience, various social and digital media have been added to the mix for work-related purposes: 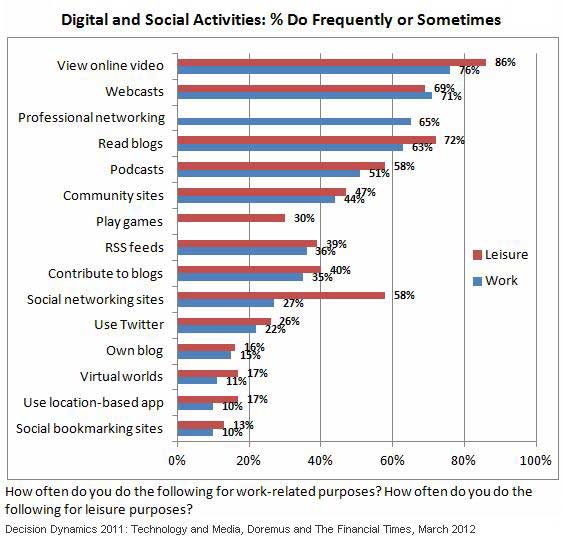 Nearly six in ten executives (58%) use social networking sites for leisure, but only 27% do so for work purposes.

Social bookmarking, location-based apps, and publishing a personal blog have the lowest penetration among the executive audience, both for work and leisure.

Below, additional findings from the Doremus and Financial Times survey of global senior executives.

The executive audience continues to consume most traditional media in printed formats, or via a mix of print and digital media. 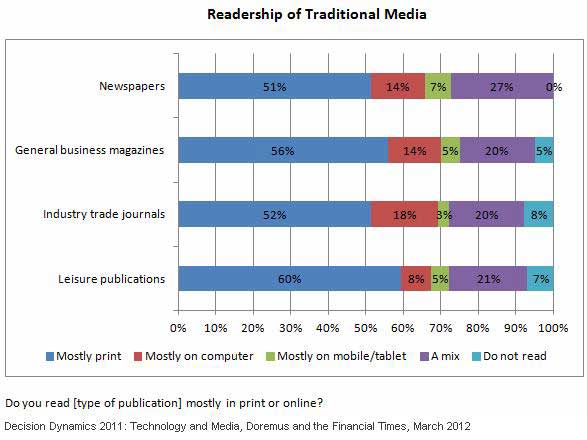 When reading leisure magazines, 60% read print and 21% read a mix of both print and digital formats.

More than two-thirds of executives use their mobile devices for multiple digital activities, Doremus found. The most popular activities are checking the news (58%) and visiting websites (52%), and fully one-quarter use their phone for online banking (26%) and shopping (25%). 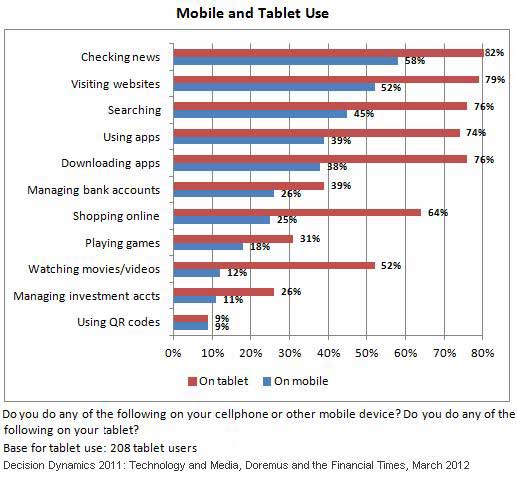 However, executives are doing even more on their tablets. The most popular activities are checking news (82%), visiting websites (79%), searching (76%), and downloading and using apps (76%).

Regarding age differences, virtually all smartphone activities are inversely correlated: Executives under age 45 are most active with their devices, and those age 55+ are the least active, according to the report.

Tablet use is also inversely correlated with age, although the differences are smaller.

Executives are connected to work most of the time: 63% say they typically don't turn off their mobile devices at night or on the weekend, and 66% stay connected on vacations.

About the data: Findings from the annual Decision Dynamics report are based on a survey of 628 executives, representing a mix of company sizes and industries from North America, Europe, and Asia; the survey was conducted in October 2011.