People want great offers. That's the primary reason they opt-in for permission-based communications from brands, whether in the form of "liking" a brand on Facebook or subscribing to an email list, according to a new survey from Constant Contact and Chadwick Martin Bailey.

Among email users surveyed, the top reasons to subscribe to an organization's email list are to receive discounts (58%) and special promotions (39%), whereas motivations such as receiving exclusive content (26%), staying informed (26%), and showing support (25%) are less important. 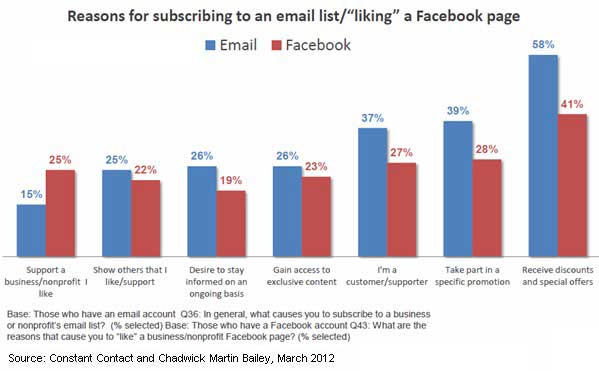 Similarly, Facebook users cite receiving discounts (41%) and promotional offers (28%) as their top reasons for "liking" a brand on Facebook.

Roughly one-quarter (27%) of Facebook users like brands to support them (27%), and 22% do so to demonstrate that support to others.

Producing content that is not relevant (42%) and over-communicating (42%) are the top reasons brands drive consumers away from their Facebook pages. 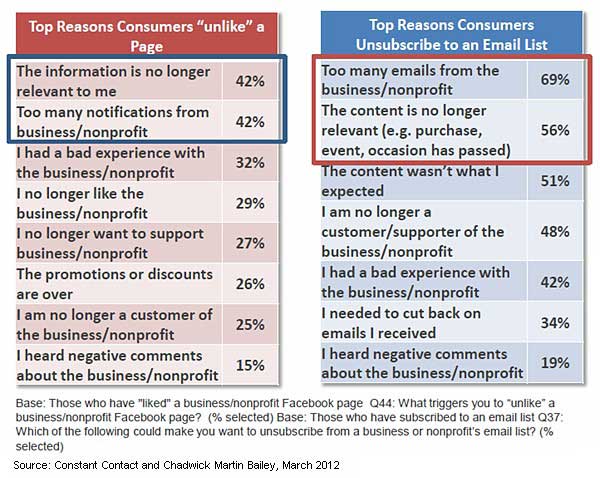 Similarly, too many emails (69%) and irrelevant content (56%) are the top reasons people cite for unsubscribing to email lists, followed by email content that wasn't relevant to begin with (51%) and simply no longer being a customer or supporter (48%).

Interestingly, among Facebook users and email consumers alike, excessive communications and irrelevant content are even bigger turnoffs than bad customer experiences (32% and 42%, respectively).

Email users say the most important factor in opening an email is the sender's identity (i.e., who the email is from)—64%—followed by the subject line (47%) and promotional offers (26%).

Lack of interest (61%) and over-sending (45%) are the top two reasons consumers do not open emails from an organization, followed by receiving too many emails overall (32%).

About the data: The Constant Contact and Chadwick Martin Bailey findings are based on a survey of 1,481 US consumers age 18+ via the Research Now online panel. The survey was fielded in the fourth quarter of 2011.