Americans Would Forfeit Cars, TV, and Sex for Their Tablets

Americans are in love with their tablets: 91% of people who own a tablet say they take their device to bed with them, and 15% say they would give up their car in order to keep their tablet, according to survey from Yahoo and Ipsos MediaCT.

Moreover, 25% of female tablet owners say they'd happily give up sex to keep their devices. And what do men have to say about that? One-third of them are in the bathroom—with their tablets, sending email (50%) and instant messages to friends (25%). 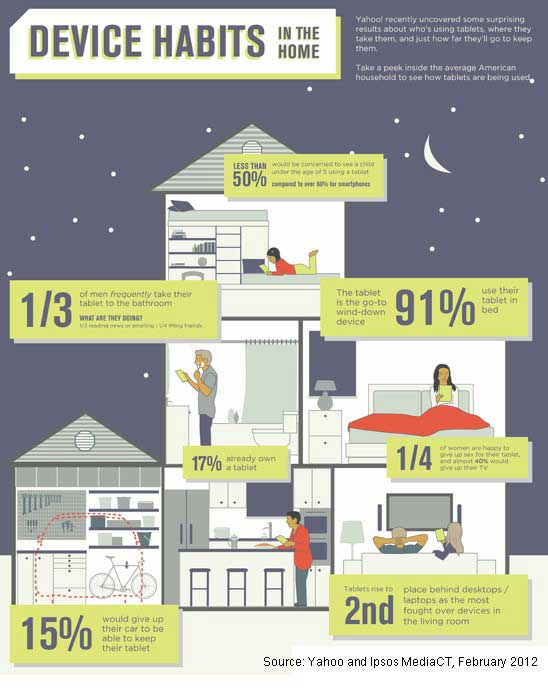 In addition, nearly 40% of female tablet owners say they would give up TV for their device.

Total tablet penetration is now 16% among Americans age 18 and older, with the most robust adoption among those age 18-34 and with annual household incomes of $100K and higher, according to a separate report by Ipsos MediaCT.

Moreover, among US adult surveyed, 15% say they will likely buy a tablet by the end of 2012, and another 11% say they'll definitely buy one. Those levels are slightly lower for women (13% and 11%, respectively). 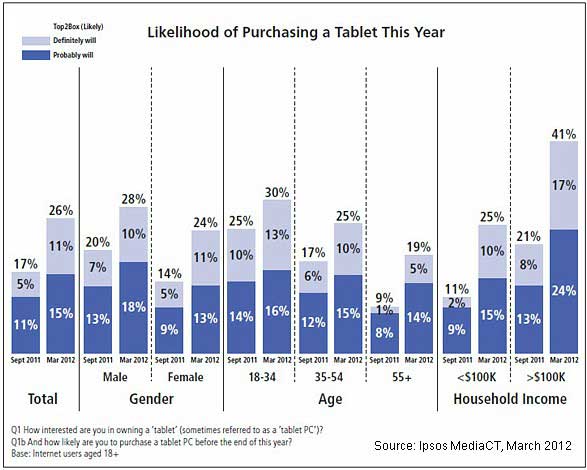 About the data: Findings are based on a survey conducted online among 1,000 US consumers age 18-64. Interviews were conducted March 12-18, 2012. The above also contains results from a set of omnibus questions asked in September 2011 and again in March 2012. The Yahoo-sponsored survey was conducted among 2,000 US adults by Ipsos MediaCT, February 23-27, 2012.