Nearly three in four mobile users (74.0%) say they fully pay attention to mobile ads while browsing the Web, either on a regular (35.3%) or occasional (38.7%) basis, according to a recent survey from Prosper Mobile Insights.

In addition, 59.5% surveyed smartphone and tablet users say they regularly (26.9%) or occasionally (32.6%) pay full attention to ads they see while visiting social media sites on their devices. 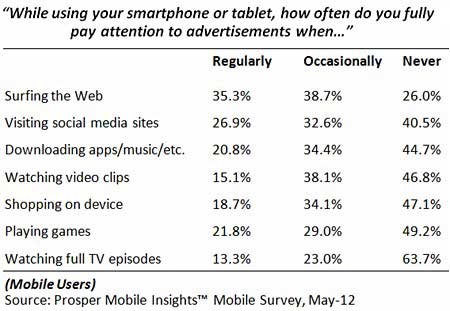 Below, other findings from the Prosper Mobile Insights survey.

Men pay more attention to ads, and are more likely to be influenced by ads

Moreover, 51.0% of men say ads viewed via smartphone or tablet regularly or occasionally influence the products and brands they purchase, compared with 43.7% of women who say the same.

Though more likely to pay attention to ads, a slightly greater number of men say they have paid for an ad-free version of a mobile app: 29.3% of male mobile users have done so, compared with 26.4% of women.

However, 46.2% of all mobile users say they are not at all or not very willing to pay to remove ads served via their favorite social networking sites (e.g., Facebook).

About the data: Findings are based on a survey of 331 smartphone and tablet users, conducted May 21-25, 2012 via tablets and smartphones by Prosper Mobile Insights.