In only two years since the release of Apple's iPad, tablets have reached critical mass in the US: One in four smartphone owners used a tablet during the three-month period ended April 2012, according to data from comScore.

Moreover, among those who viewed video via their tablets during the three-month period, one in four paid to watch content, highlighting the monetization potential of the platform.

Below, additional findings from comScore TabLens, the data provider's forthcoming monthly syndicated service providing insights into tablet ownership and use.

Typically, "critical mass" is viewed as a crucial stage in a product's development cycle, and a precondition for driving mainstream, self-sustained adoption (i.e., without having to add any more investment).

Some 16.5% of mobile phone subscribers used a tablet as of April, up 11.8 percentage points (PPs) from a year earlier. Growth in market penetration was even more apparent among the smartphone population: 23.6% used a tablet during the period, up 13.9% PPs over the previous year. 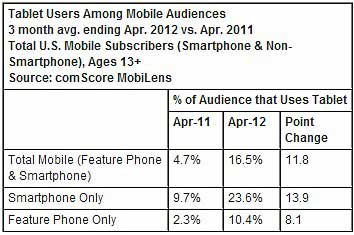 A lower 10.4% of feature phone owners use a tablet as of April, suggesting that smartphone ownership is highly predictive of tablet adoption in the current market. 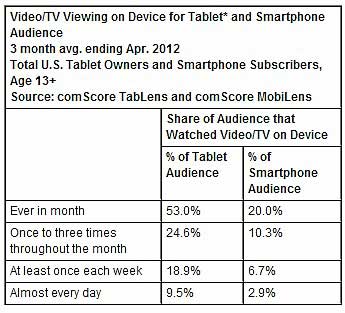 Among those viewing video at least once during the month, 26.7% paid to watch content.

Tablet and smartphone audiences closely resemble one another in terms of gender composition, with tablet users just slightly more likely to be female than smartphone users. 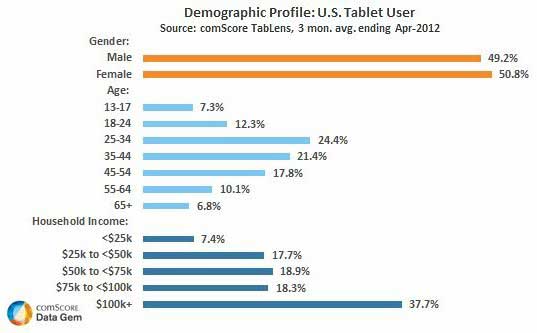 Tablet users also skew toward upper income households, likely a function of the high price point of these devices still considered a luxury good to many consumers. Nearly three in five tablet users (37.7%) reside in households with annual income levels of $75,000 or greater, compared with one in every two smartphone users.

*Note to chart: comScore defines a media tablet as a touchscreen tablet device with a slate form factor, a 7 inch or greater screen size and a data connection, but no voice plan. Single purpose eBook reader devices are excluded from this definition.