Virtually all of the nation's top MBA schools are using popular social media channels to promote their programs and recruit students, according to a study by the Center for Marketing Research (CMR) at the University of Massachusetts at Dartmouth.

Moreover, 82% of the MBA schools surveyed plan to increase their investment in social media over the next year, and all agree that social marketing is worth the investment.

Below, additional findings from the report titled "The Missing Link in Social Media Use Among Top MBA Programs: Tracking Prospects," conducted by the University of Massachusetts Dartmouth CMR, based on the 2012 US News Best Business Schools Rankings.

Among some 70 US schools studied, 100% use at least one social media platform or tool to promote their programs. Facebook enjoys 100% penetration among the top schools, followed by Twitter with 96%, LinkedIn with 87%, and YouTube with 77%. 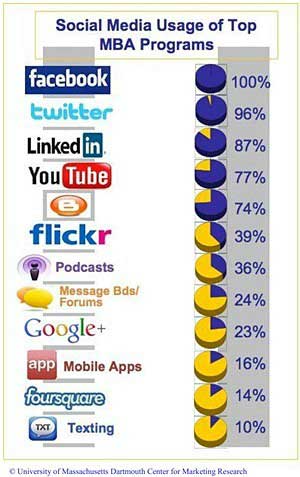 Asked which social media tools they view as most effective, MBA schools rank Facebook as No. 1 (83%). Apart from Facebook, adoption levels don't necessarily correlate with perceived effectiveness. For example, downloadable mobile apps are rated as the second most effective promotional tool, though only 16% of schools use the mobile tools. 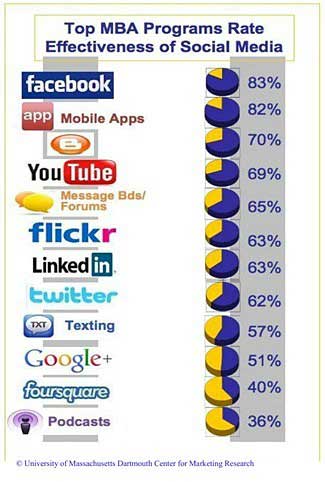 Overall, 41% of MBA programs report that social media plays a critical or major role in their marketing efforts.

Even so, only 44% of MBA schools say social media reduces the cost of traditional advertising or marketing for their programs.

Most (65%) schools don't track the number of perspective students who engage with them via social media and then submit complete applications.

Moreover, though 94% report recruitment as the top goal of their social marketing efforts, the top 4 measures of effectiveness don't include tracking prospective applicants: 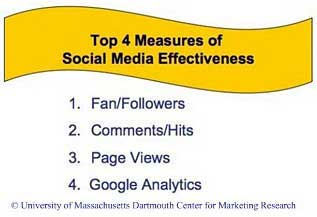 Some 42% of MBA schools have no written policy governing the use of social media for their program, and 29% don't use any monitoring tool to track buzz or conversations about their program.

Note: The list of top MBA programs in the US, for the purpose of this study, is based on the 2012 US News Best Business School Rankings. US News surveyed 441 MBA programs in fall 2011 and early 2012 to determine the 102 top ranked schools.

About the data: Findings are based on telephone surveys with 70 of the 102 top ranked schools. Schools in the study are diverse in affiliation, geography and size and include the University of Chicago, Columbia, Rutgers, Yale, the University of Kentucky, and Georgetown University. Among the sample, some 56% of the schools are funded publicly and 44% funded privately. All interviews were conducted with the MBA Director, Assistant Dean for Graduate Studies or someone holding a similar position in 2012, under the direction of researcher Nora Ganim Barnes, PhD. Read the full list of participating schools.