The new findings are based on a three-month study of consumer engagement with online campaigns for 20 major retails brands, including Abercrombie & Fitch, The Gap, Ralph Lauren, American Eagle, J Crew, and Forever 21.

Among the Facebook campaigns studied, those deployed on Tuesdays earned the highest engagement, even though Tuesday ranked fourth in terms of the number campaigns conducted. 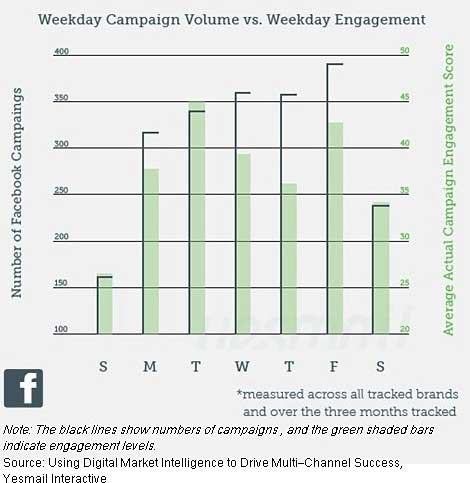 Overall, fewer Facebook campaigns were conducted over the weekend during the three-month study period.

Some retail brands generate higher engagement levels than others via Facebook, regardless of the sizes of their fan bases.

In order to clearly see campaign engagement, the study compared the "volume-based engagement" of Facebook campaigns (based on the number of "likes" and comments a campaign boasts) with an "actual engagement analysis," in which the data were controlled for fan/follower size.

For example, because Eddie Bauer has a relatively modest following of about 73,000 Facebook brand "likes," and Ralph Lauren boasts over 4.9 million, an Eddie Bauer campaign will consistently garner fewer likes and comments when compared with a Ralph Lauren campaign.

However, when the data are controlled for follower size, the picture is quite different: Otherwise average-performing brands instead emerge as engagement leaders, includng Ann Taylor, The Limited, and Eddie Bauer.

In the chart below, the solid black lines show volume-based engagement (defined by the sum of “likes” and comments per campaign), while shaded green areas show actual engagement (controlled for follower size). 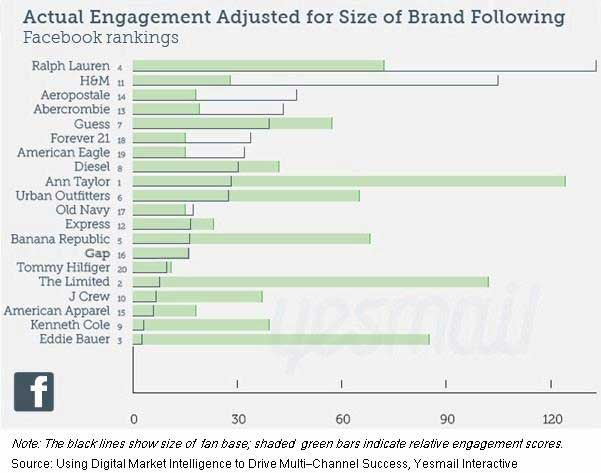 When it comes to the optimal frequency of Facebook campaigns (deployed per month), there appears to be no universal number that guarantees success.

However, the study examined the number and frequency of campaigns adopted by the five most engaging retail brands on Facebook: Ann Taylor, The Limited, Ralph Lauren, Eddie Bauer, and Banana Republic.

In addition, among the brand campaigns studied, the highest Facebook engagement was found among campaigns starting between 10 pm and 12 am Eastern time (EST). That was also the least-used deployment time slot.

A similar analysis was conducted for campaigns deployed via Twitter. Key findings include the following: 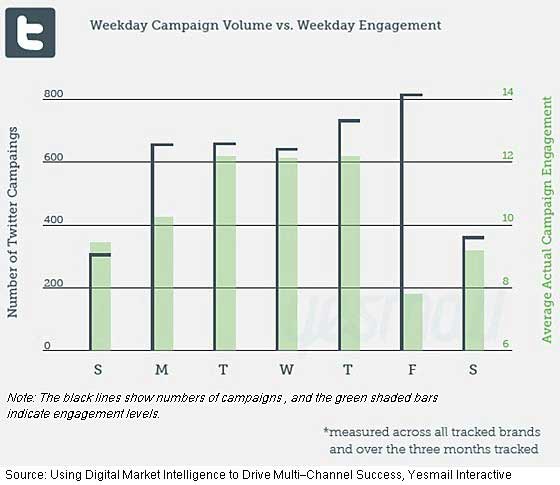 Similarly, the study compared the performance of Twitter campaigns among the 20 retail brands. Though Forever 21 ranked first in terms of follower base size, the brand's campaigns were far less engaging than the campaigns of brands with smaller follower bases: 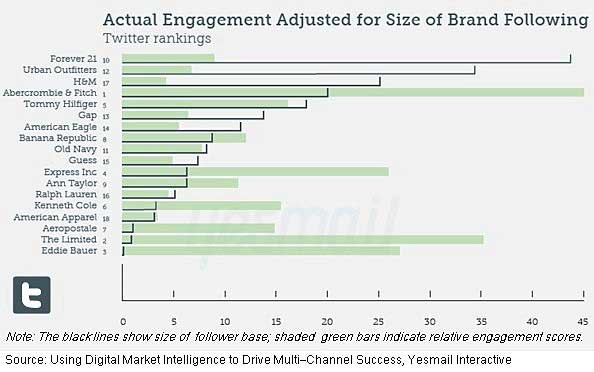 Moreover, the study highlights how brands often have hugely different success levels, even those within the same corporate family.

For example, Gap-Inc owned Banana Republic has an outsized engagement ratio given its relatively small social media footprint: 74,000 likes on Facebook and 5,500 followers on Twitter. By contrast, The Gap (Banana Republic's sister company) has almost 2.5 million fans on Facebook and 154,000 followers on Twitter. However, on a per-follower/fan basis, the brand has a much lower engagement ratio both on Twitter and Facebook.

The most engaging time slots for Twitter-based campaigns were 5 am to 6 am and 7 am to 8 am EST. However, among the Twitter campaigns studied, some 84% went live from 9 am to 7 pm EST—or during regular work hours.

The study also examined YouTube campaigns. Despite the channel's popularity, 85% of the brands studied have a YouTube channel and among them, only 35% deployed campaigns during each of the three months tracked.

About the data: Findings are based on campaigns conducted from January to March, 2012 among 20 leading retail brands. The data were collected via Yesmail Market Intelligence, the company's proprietary tool , which tracks and analyzes digital campaigns deployed via email, Facebook, Twitter and YouTube. The various brands were selected because of their focus on the 18-35 year-old demographic, a segment generally considered to have digital marketing prowess.