Few CEOs at Fortune 500 companies are participating in social media channels: 70% have no social media presence on Facebook, Twitter, LinkedIn, Pinterest, or Google+, according to a new study sponsored by Domo and CEO.com.

The 2012 Fortune 500 Social CEO Index, which investigates the social media habits of leading CEOs, also found that CEOs are more active on one social network—LinkedIn—than is the general public, despite being far behind the general population in overall social media participation.

LinkedIn was by far the most popular among Fortune 500 CEOs: 26% use the network, compared with just 20.15% of the US general public. 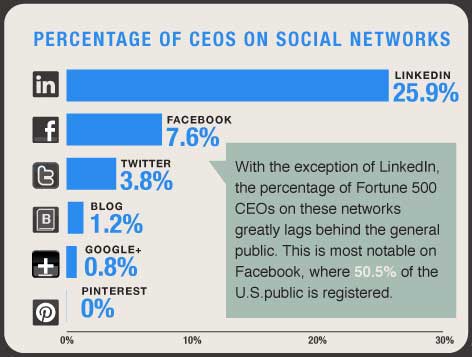 But on major social networks Facebook, Twitter, and Google Plus, the presence of Fortune 500 CEOs was minimal at best:

Other notable findings (also see infographic, below) about Fortune 500 CEOs' social media use:

"We really expected to see more social engagement from CEOs, especially since the benefits of social media are no longer just wishful thinking," said Josh James, Domo founder and CEO. "CEOs who use social media are growing their businesses, attracting lifelong customers, generating exposure for their companies and closing new deals. As consumers become more social savvy, so must company leaders."

About the study: From May 7 to May 21, 2012, CEO.com searched for every Fortune 500 CEO on each of the major social networks to derive the results of the study. CEO.com is sponsored by Domo, a cloud-based executive management platform.