On average, the companies listed on the Fortune Global 100, an index of the largest corporations in the US, Europe, Asia-Pacific, and Latin America, generate a total of 10,400,132 online mentions per month, mostly via Twitter, according to a report by Burson-Marsteller and Visible Technologies.

During February 2012 (the four-week study period*) each of the Fortune Global 100 companies was mentioned an average of 55,970 times on Twitter. Online forums and blogs also offered social engagement opportunities for the leading global brands, but at far lower levels, generating an average of 19,739 and 19,610 mentions during the month, respectively: 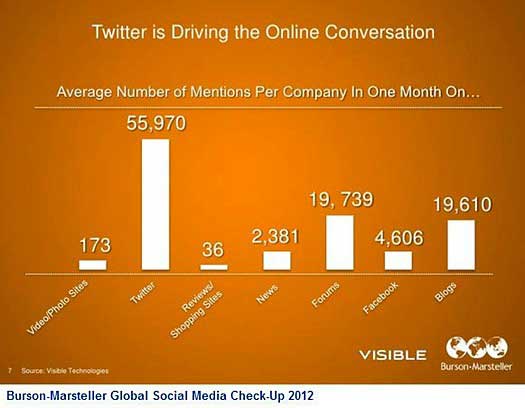 Below, additional findings from the 2012 Burson-Marsteller Global Social Media Check-Up, which examines the social media activity among the Fortune Global 100, including brands such as Ford, Sony, AT&T, Honda, and Walmart.

Followers Numbers on the Rise

Overall, most (87%) Fortune Global 100 companies are using at least one of the major social platforms to communicate with online stakeholders. And by far, the biggest bump in corporate social media adoption over the past year has occured on YouTube.

Even so, Twitter is now the most widely adopted social channel among the Fortune Global 100 companies: 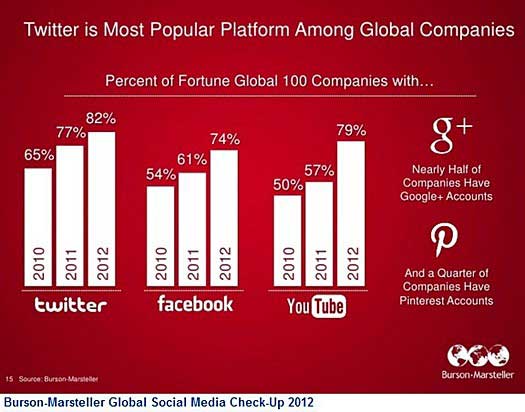 Multiple accounts on social media platforms (which give companies the ability to target audiences by geography, topic, and service) are also on the rise. 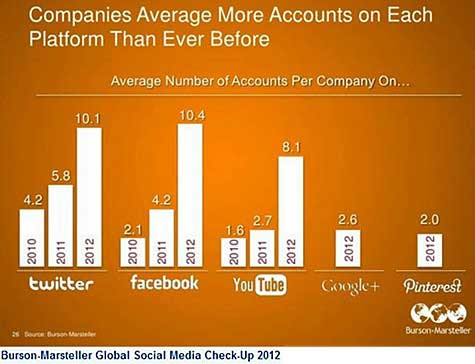 About the study: Findings are based on the Fortune Global 100 companies social media activity on Twitter, Facebook, YouTube, and Google Plus gathered in February 2012, and on Pinterest, gathered in July 2012. Sample size for countries/regions: US: 29 companies; Europe: 45 companies; Asia-Pacific: 23 companies; and Latin America: 3 companies. Comparisons were made to Burson-Marsteller's first Fortune Global 100 Social Media Study, The Global Social Media Check-up 2010, published on February 23, 2010, and The Second Annual Global Social Media Check-up, published on February 15, 2011. Data was collected by Burson-Marsteller's global research team. Visible Technologies also provided new data on how much consumers and other stakeholders discuss companies online.