Word-of-mouth is key to the success of daily deals: When making a daily deal purchase from a new or unfamiliar small business, fully one-half (50%) of consumers cite recommendations from friends or family as the factor most likely to influence their decision to purchase, according to a report by Constant Contact and Chadwick Martin Bailey.

Some 32% of surveyed consumers say they're more likely to purchase a deal if the group-buying provider is a national brand (e.g., Groupon, Living Social), whereas only 6% say recommendations via social media channels influence their group-buying decisions: 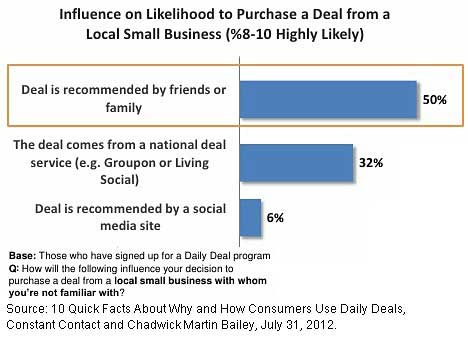 Below, other findings from the report titled "10 Quick Facts About Why and How Consumers Use Daily Deals," issued by Constant Contact and Chadwick Martin Bailey.

Personal endorsements drive deal purchases, particularly among women: 35% of women say they're more likely to buy a deal when it's recommended by someone they know, compared with 25% of men who say the same: 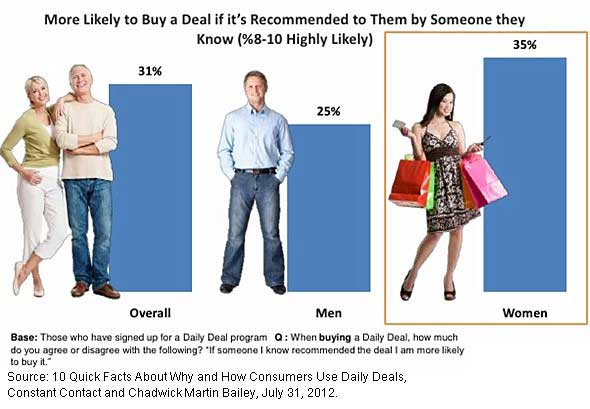 Most people who sign up to receive daily deals eventually buy something.

Among consumers who have subscribed to a daily deal service, nearly four in five (79%) have purchased a deal in the previous six months; among them, 27% have purchased five or more deals: 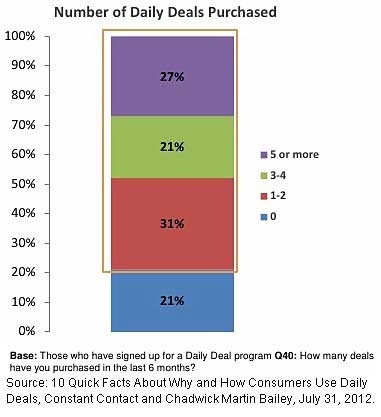 Moreover, people share deals with others, regardless of whether they are a customer:

However, familiarity and proximity are important.

Nearly two in five (39%) consumers are more likely to buy a deal from a small business close to their home or work, and 43% tend to buy from businesses they're already familiar with. 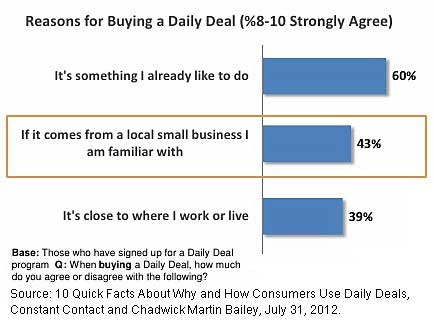 About the data: Findings are based on an online poll of 1,433 consumers age 18+ in the US, conducted by  Chadwick Martin Bailey's Consumer Pulse in the first quarter of 2012.