Smartphone users who are familiar with mobile ads appear to be comfortable making a purchase or recommendation as a result of an ad, but many others still haven't viewed a mobile ad, according to a survey from Hipcricket Inc.

Some 46% of surveyed smartphone owners have viewed a mobile ad; among them, 64% have completed at least one purchase as a result of doing so.

However, 74% of smartphone users say their favorite brands have not advertised to them via mobile: 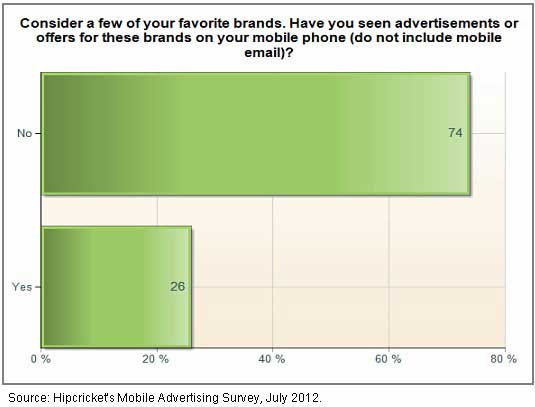 Among the key findings:

Mobile users' primary means of interaction has been clicking/tapping an ad (38%), followed by mobile coupon redemption (31%), clicking on a sponsored link in a text message (29%), downloading an application (28%), and viewing a mobile website (24%). 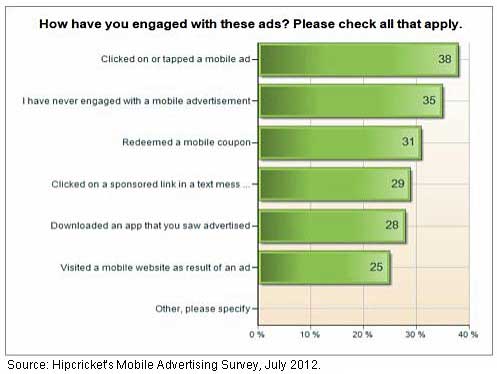 People tend to interact differently with mobile ads depending on income level, gender, and age.

Affluent customers are more likely to have engaged with mobile ads:

The most interest and interactivity with mobile ads is among younger users. Among smartphone users age 25-34:

However, smartphone users age 35-44 year are the most interested in coupons and offers, with 63% reporting they'd be more inclined to engage with a mobile ad from their favorite brand if it included an offer or coupon.

Among those who haven't engaged with a mobile ad, the reasons are varied: 43% say the ads weren't relevant to their interests and 39% simply say the ad "did not appeal to me." 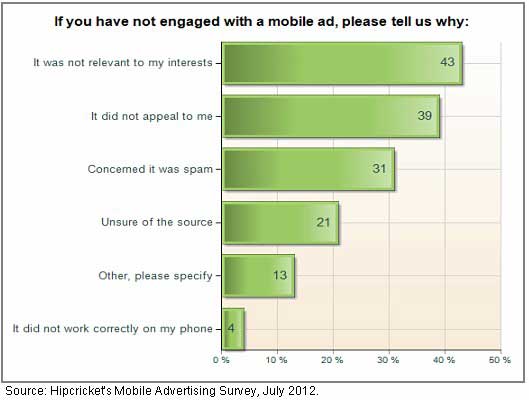 Nearly one-third of smartphone users (31%) thought the ad was spam, whereas 21% were unsure of the source.

About the data: The 2012 Mobile Advertising Survey is based on a national survey of 650 mobile phone users conducted via email in June 2012.