Facebook overtook Yahoo as the second most popular website for online video viewing in July 2012, attracting some 53.0 million unique viewers during the month, compared with 48.7 million for Yahoo, according to data from the comScore Video Metrix service.

Yahoo users, however, watched more videos during the month, and spent more time doing so: 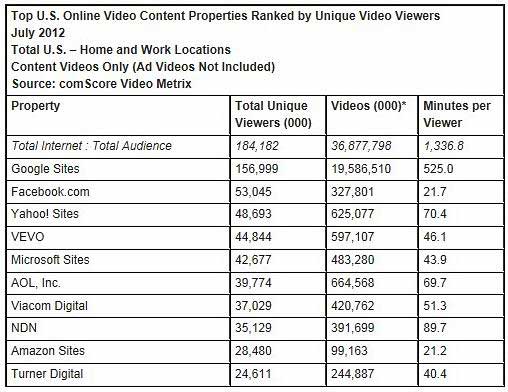 In total, more than 184 million US Internet users watched nearly 36.9 billion video content views during the month, with Google Sites generating the highest number at 19.6 billion, followed by AOL with 665 million.

Among some 9.6 billion video ads in July, Google Sites generated the highest number of video ad impressions at more than 1.5 billion, followed by Hulu with 1.2 billion, Adap.tv with 1.1 billion, SpotXchange Video Ad Marketplace with 1.0 billion, and TubeMogul Video Ad Platform with 830 million. 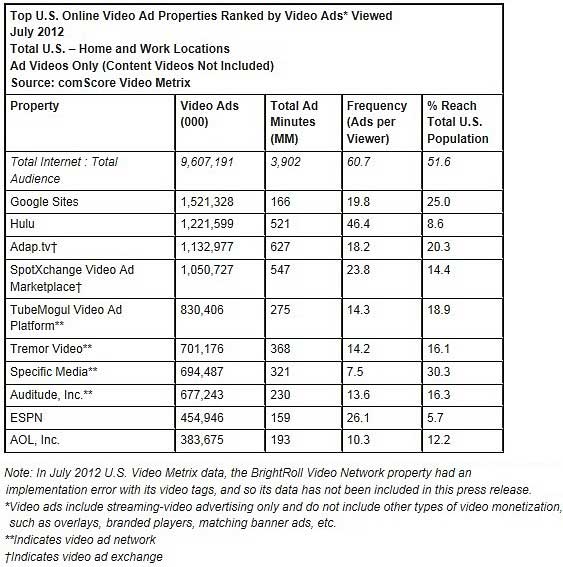 Video ads reached 52% of the total US population an average of 61 times during the month. Hulu delivered the highest frequency of video ads to its viewers with an average of 46, while ESPN delivered an average of 26 ads per viewer.

Ranked by unique viewers, video music channel VEVO was the top YouTube video partner in July, with 43.9 million viewers. For the first time, gaming channel Machinima was second with 25.3 million viewers, followed by Warner Music with 24.9 million and Maker Studios with 20.4 million. 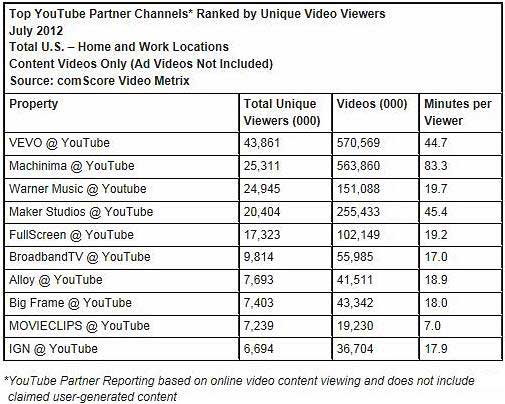 *A video is defined as any streamed segment of audiovisual content, including both progressive downloads and live streams. For long-form, segmented content, (e.g. television episodes with ad pods in the middle), each segment of the content is counted as a distinct video stream.Video views are inclusive of both user-initiated and auto-played videos that are viewed for longer than 3 seconds.