Among US smartphone owners, some 90% of the media they interact with (about 4.4 hours a day) is screen-based, and most of them (90%) move sequentially among multiple screens (TV, smartphone, tablet, and computer) to accomplish various tasks over time, according to (pdf) a Google study. 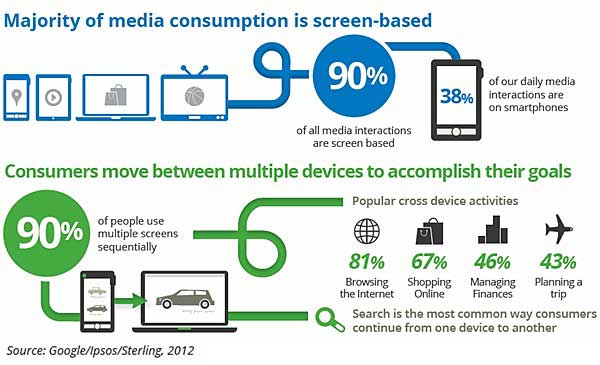 For example, people may start reading an email via smartphone while traveling—but finish reading at home via tablet. Similarly, a consumer might watch a TV commercial, and then turn to their laptop to research a product.

Among online adults who own a smartphone, 38% of daily media interactions occur via smartphone. 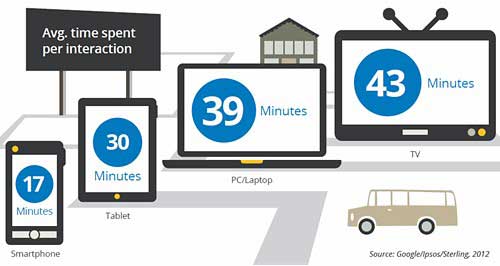 However, smartphones are the most popular place for starting online activities.

Among those who start an activity on one device and continue to another, nearly two-thirds begin their interactions with social networks (66%), retail websites (65%), and search engines (65%) via smartphone, and then continue on another device (often with a larger screen). 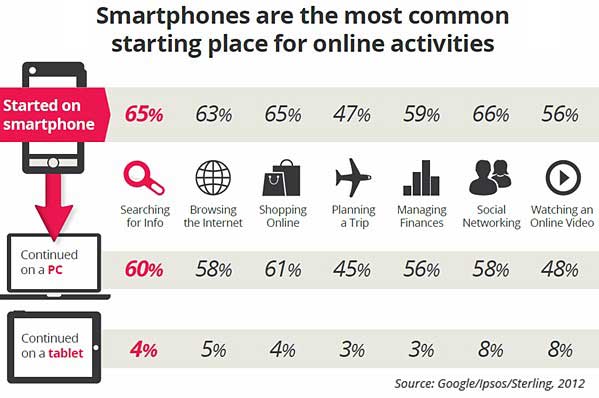 Smartphones are also part of the TV viewing experience: 77% of smartphone owners simultaneously use another device such as a smartphone (49%) or PC/laptop (34%) while watching TV. 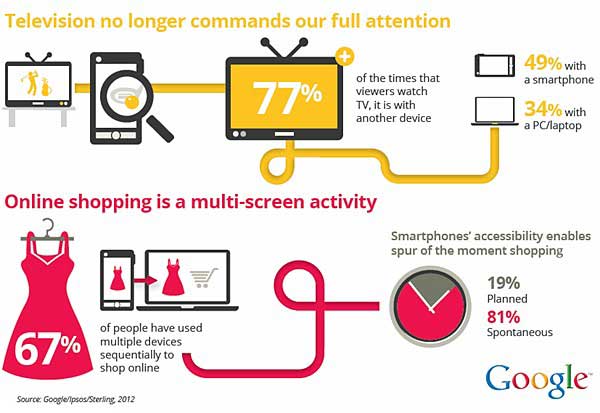 More than two-thirds (67%) of smartphone owners have used multiple devices sequentially to shop online, and 81% say they most often use their smartphone during the online shopping experience spontaneously, whereas 19% say those interactions are planned.

About the data: Google commissioned Ipsos MediaCT and Sterling Brands to conduct the study, which consisted of two research phases (qualitative and quantitative), including a survey of 1,611 online adult participants (from Boston, Austin, and Los Angeles). All participants owned a smartphone, and 43% owned a tablet. Participants logged each of their media interactions in a mobile diary over a 24-hour period. Roughly 7,955 hours of media activity was measured. Participants also completed a separate online survey. All information was collected in the second quarter of 2012.