Does the size of a social media following matter? Although two in three SMBs (67%) say they favor quality over quantity, including a plurality (40%) who prefer very engaged followers, more than one in four (27%) SMBs place more importance on the number of followers than engagement level, according to a survey from Vocus and Duct Tape Marketing:

Below, additional findings from the report titled "Path to Influence: An Industry Study of SMBs and Social Media," by Vocus and Duct Tape Marketing.

Larger SMBs are more likely to favor a larger following: 34% of those with annual sales of more than $20 million prefer large follower bases regardless of interaction levels, compared with only 13% of those with sales from $5 million to $20 million. 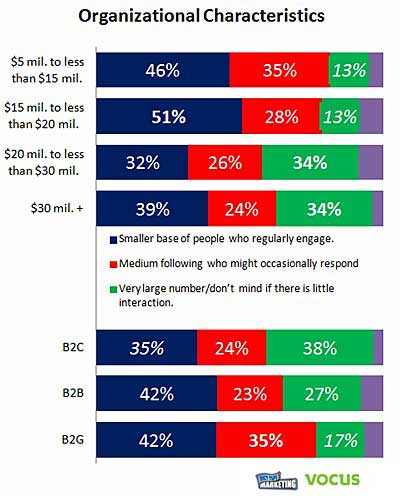 B2B organizations, and those that market to the government (B2G), tend to favor a smaller yet highly engaged audience, whereas B2C organizations are split between the desire for large social media followings and engagement.

Some 40% of SMBs in the B2C category, the segment most focused on building a large even if unengaged following, are most likely to find social media very helpful.

Among SMBs, sharing news about the organization or products and services (91% and 90%, respectively) are the most popular ways to use social media. Some 70% use social channels to improve search engine results; however, only 46% use social media for customer service issues. 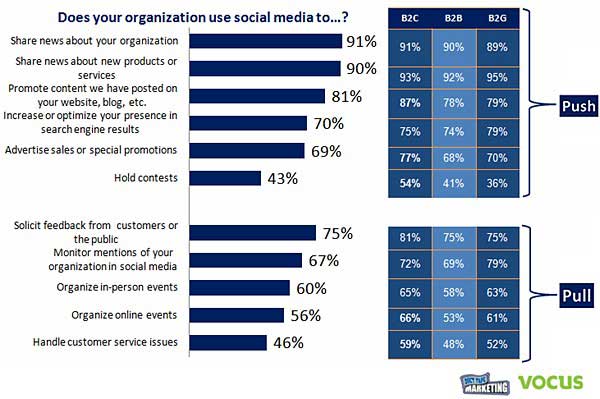 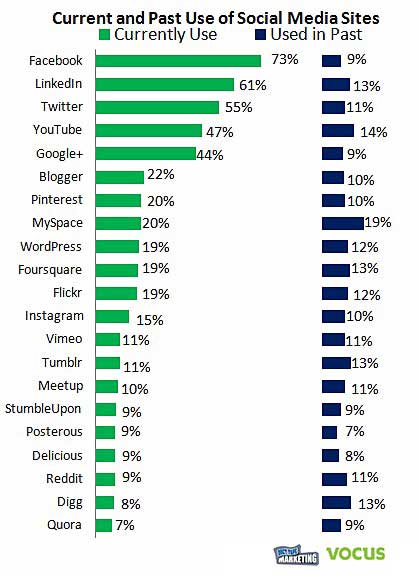 Over the next year, SMBs are planning to add a few key sites to their social portfolios; the following five top the list:

Facebook has reached near saturation with only 7% of SMBs planning to adopt that site over the next year, while another 9% plan to use LinkedIn.

The study also polled SMBs on their social media budgets: