Not all social media conversations, particular those related to controversial health topics, are legitimate or authentic, according to a study by KDPaine & Partners that explores the nature of viral conversations around three controversial topics: high-fructose corn syrup (HFCS), foods containing genetically modified organisms (GMOs), and vaccinations.

Of the analyzed 301,497 social media conversations on those topics over a one-year period, roughly one-third (33%) were generated not from real people but from illegitimate sources such as pay-per-click sites, content farms, and robot responders, the study found.

Moreover, those 33% of posts were generated by about 10% of all users/sources posting comments. On average, such "high-volume posters" generated 25 or more posts during the 12-month period. 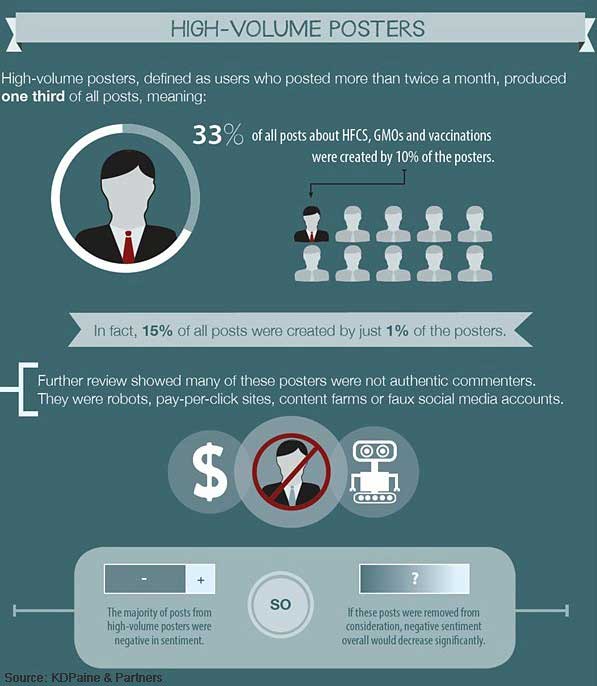 Further review showed that high-volume posters were not authentic users (e.g., they were robots, content farms, fake accounts, etc.). Many of the links in such content directed readers to pay-per-click content sites. One user found was "Ron Rudolph," who posted 848 times from multiple handles—all of which were linked to viralbizonline.com.

Below, additional findings from KDPaine & Partners.

High-volume posters tend to be negative: Nearly three-quarters (73%) of posts dispatched by high-volume users were negative in sentiment. (Therefore, if such posts were discredited, a significant portion of negative posts would be discredited as well, the study notes.)

Low-volume posters constitue the majority of all posts: More than one-half (56%) of posts were published by people who commented once or twice during the entire year. Though such posters were more likely to be human, they were not very engaged in the topic and tended to move on after the comment was made, the study found.

Also, such comments tended to be a quick sharing of stories, existing comments, or links—rather than original comments with personal sentiment or opinion. 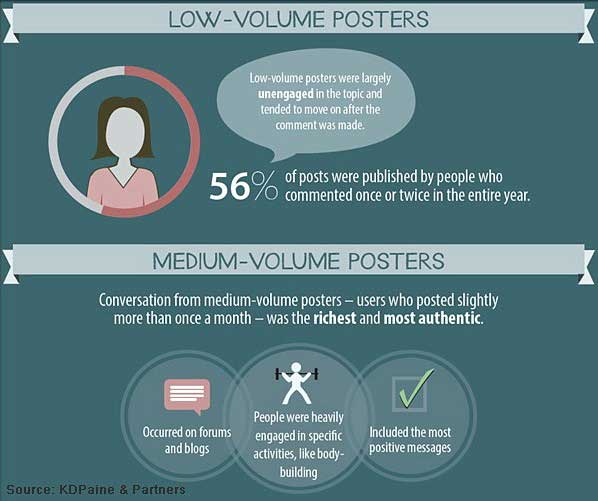 The richest, most authentic conversations took place among medium-volume posters (those who generated 13-24 posts per year). Such conversations accounted for just 11% of all posts, according to the report.

Posts issued by medium-volume posters tended to be more positive in sentiment than those from the high-volume or low-volume groups. They also occurred mostly on forums and blogs (not in the more popular arenas of Facebook and Twitter), and were generated by people heavily engaged in specific, related activities, such as organic farming, body-building, or cooking.

Across all the conversations studied, blog posts accounted for more than one-third of those tracked; another 30% were found on Twitter and 15% on forums: 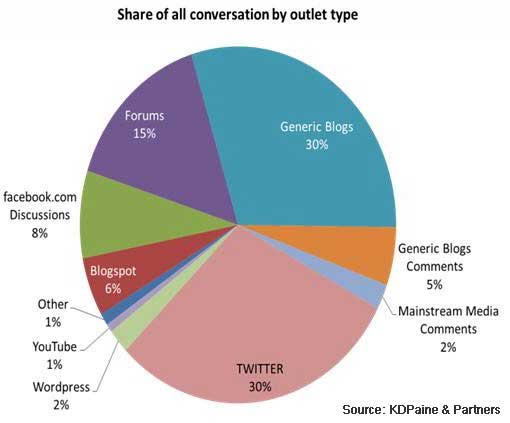 About the study: For the study, 301,497 social media conversations from Twitter, Facebook, YouTube, blogs, and forums collected with Radian 6 monitoring software targeting High Fructose Corn Syrup (HFCS), Genetically Modified Organisms (GMO), and Vaccinations, from October 1, 2010, to October 1, 2011. This data was cleaned to remove bad characters and missing data field to produce the sample population of 280,550 items for additional analysis. If all information wasn't available for a post or author, that data point was removed from the study.