Nearly two in five US tablet owners read newspapers or magazines via their device in the three-month period ended August 2012, and among them one in ten read such publications almost daily, according to data from the comScore TabLens service.

Moreover, among the users of various tablets, Kindle Fire users were the most likely to read newspapers and magazines via their device.

Below, additional findings from comScore TabLens.

Kindle Fire users demonstrated the greatest tendency to read newspapers: 39.2% did so, edging out iPad users at 38.3%. NOOK Tablet owners boasted the greatest percentage of high-frequency newspaper readers, with 13.4% reading them on a near daily basis. 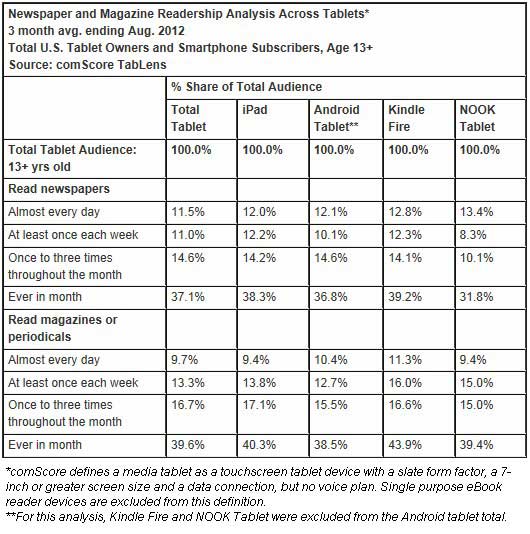 Magazines/periodicals recorded even higher readership rates than newspapers: 39.6% of tablet owners read magazines via their device. Once again, Kindle Fire owners recorded the the highest readership rate at 43.9%, followed by iPad users at 40.3%.

Newspaper and magazine tablet audiences closely resembled one another in gender, age, and household income distribution.

Readers of newspapers and magazines were significantly more likely to be male. 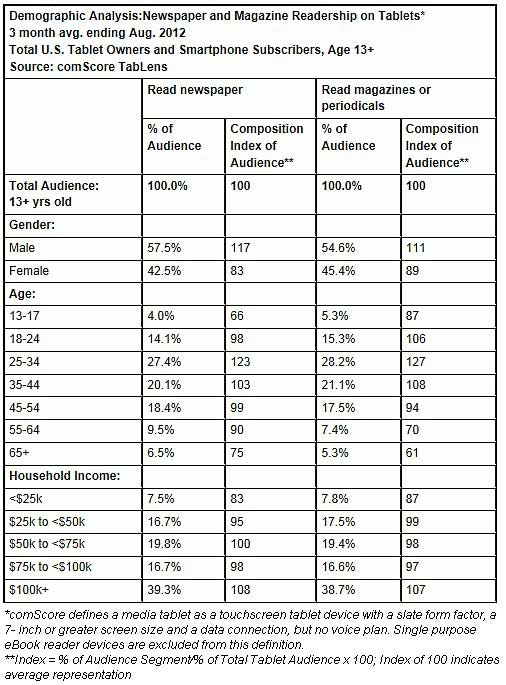 People age 25-34 comprised the plurality of readers—some 27.4% of newspaper consumers and 28.2% of magazine/periodical consumers—whereas people age 35-44 accounted for one in five readers in both categories.

More than one-half of readers had a household income of $75K or greater, whereas those in the highest income segment of $100K or greater were the most prolific readers.

"In the case of online newspapers, tablets are now driving 7% of total pageviews, an impressive figure considering the relative infancy of the tablet space. Publishers that understand how these devices are shifting consumption dynamics will be best positioned to leverage this platform to not only drive incremental engagement among current subscribers but also attract new readers."