Over the past year, America's top brands have made few improvements in how they use online branded communities to reach their customers, according to a report released today by ComBlu.

Among some 219 online communities managed by 92 US brands, a dwindling proportion is using a strategic approach to social engagement in 2012, and most have recorded static or falling engagement activity levels, the report found.

Below, additional findings from the fourth annual "State of Online Branded Communities" report, issued by ComBlu.

Among the 219 online branded communities studied: 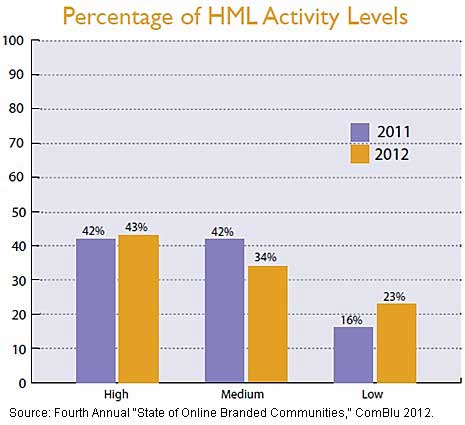 Many brands have not used their community managers to stimulate engagement and to consistently showcase what's new or interesting inside the community. In some communities, managers have failed to respond to forums or discussion threads, diminishing the value of the community as a go-to place for ideas, tips, and brand relationships, according to the report.

Fewer brands are taking a strategic approach to social engagement in 2012. Among the 219 online branded communities: 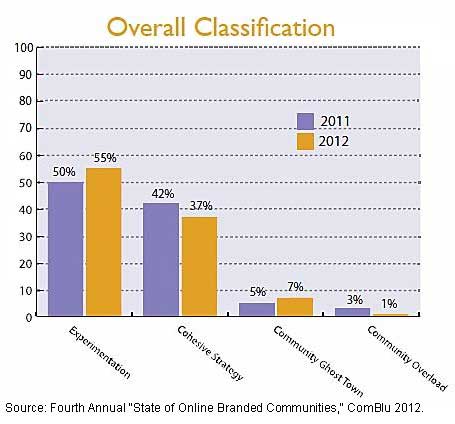 Some brands are using multiple strategies of engagement within the same community.

ComBlu defines three such strategies, or "pillars" of engagement as the following: 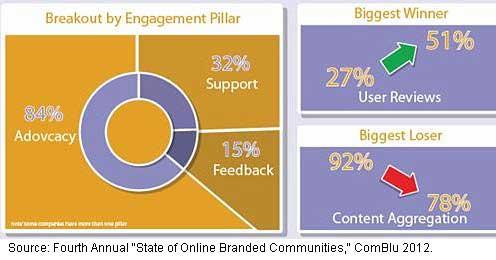 Over the past year, many brands adjusted their social media engagement tactics; among such changes:

Best-practices such as mission-appropriate engagement (96%) and new/featured content (93%) continued to have the highest adoption, followed by easy navigation (90%), rich-media content (89%), and faceted search (88%):

Only 15 brands were ranked as high performers, based on their adoption of best practices.  On a scale of 0 to 60, such high performers received a minimum of 50 points.

Among the highest performers, Verizon Communications led with 56 points; followed by SAP with 55 points, Sony PlayStation with 54 points, EA (Electronic Arts) with 53 points, and AT&T, Bravo, and IBM, each with 52 points.

Among the 16 industries in the study, telecom was the highest-scoring with 52 points, followed by gaming and tech (each with 44 points), entertainment (41 points), and the beverage industry (40 points): 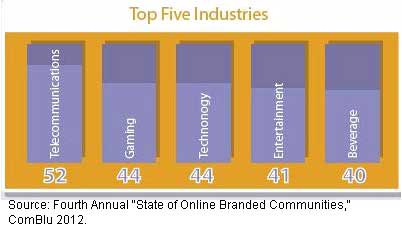 About the data: The audit of 219 online branded communities among 92 US companies was conducted by ComBlu during the summer of 2012. None of the companies was aware its site was being analyzed, and ComBlu did not contact the companies prior to the analysis of the data it collected.