Traditional, face-to-face tactics are still fundamental for SMB marketers: Personal relationships and networking (95%), tradeshows and industry events (89%), and in-person events (86%) rank as the most popular marketing tactics for finding new customers, according to a survey of small and midsized businesses conducted by Forrester Consulting for Act-On Software.

Among surveyed SMBs, content marketing (83%) is also a big part of the customer acquisition mix, followed by print advertising (77%), public relations (74%), and SEO (73%). 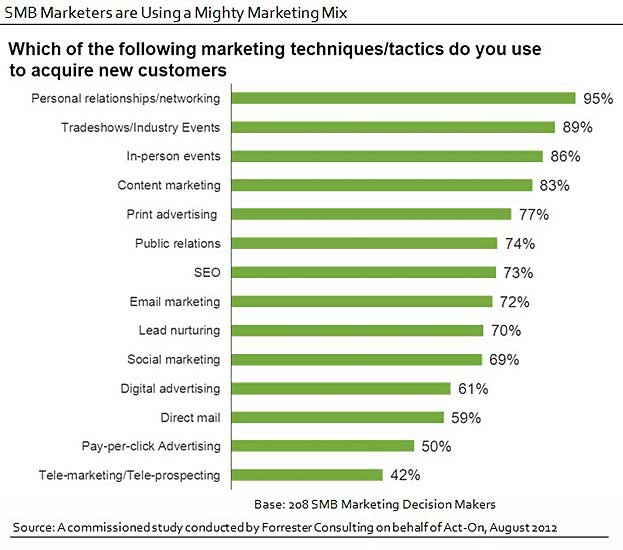 Moreover, SMBs appear to be "doing it all" with small teams of marketing generalists.

Below, additional findings from the study titled "Driving SMB Revenue in a Tough Economy."

Though 69% of SMBs use social media as part of their customer acquisition marketing mix, results from those efforts across various social platforms are somewhat mixed: 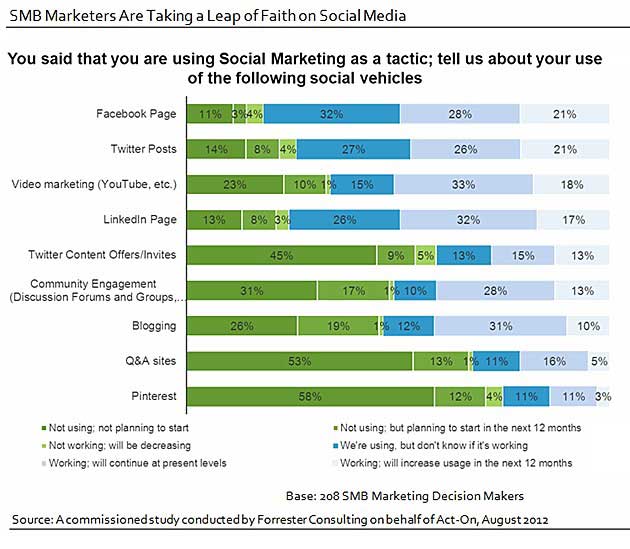 Among SMBs, the top marketing challenge is converting more leads into opportunities (41%), followed by closing more deals from existing lead flows (39%), increasing sales from existing customers (33%), and differentiating themselves from the competition (33%).

Also, SMBs aren't making use of marketing automation, Forrester found: Only 19% say they have implemented software that automates marketing and lead management processes.

By contrast, 56% of SMBs say they have implemented CRM technologies.

About the data: Findings are based on a survey of 208 marketing decision-makers in small and medium-sized businesses (SMBs), from multiple industries across the US, conducted from June to September 2012.