Bolstered by Internet advertising—particularly social media and online video—global ad spend growth is forecast to strengthen over the next three years, rising from an estimated 3.3% year-over-year (YOY) growth in 2012, to 4.1% growth in 2013 and 5.6% growth in 2015, according to projections by ZenithOptimedia.

Moreover, Internet ad spending is projected to overtake newspapers—for the first time—in 2013, and then exceed the combined total of newspaper and magazine advertising in 2015.

"Advertisers are willing to increase their budgets wherever they can achieve a strong return on investment," said Steve King, global chief executive officer for ZenithOptimedia Group. "This means that developing markets, social media, and online video are all growing rapidly, supporting continued expansion in global ad expenditure despite stagnation in the eurozone."

Developing markets are forecast to grow 8% on average in 2013, while developed markets rise only 2%, weighed down by the eurozone crisis.

Overall global ad spend is projected to grow 4.1% in 2013, reaching $518 billion by the end of the year; however, regional growth levels vary dramatically: 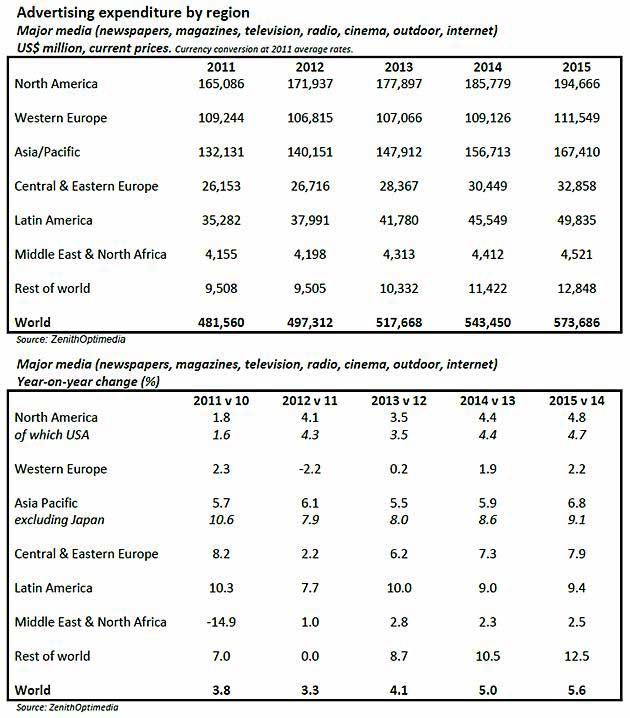 Key risks to growth in 2013 are the US fiscal cliff (automatic increases in tax and reductions in public spending that come into effect in January unless Congress passes legislation) and the potential for further conflict in the Middle East (and therefore higher oil prices).

However, the general consensus among economic forecasters is that the global economy will gradually build up speed over the next three years.

Since it began in the mid-1990s, Internet advertising has principally risen at the expense of print.

Internet advertising is now projected to increase its share of the ad market from an estimated 18.0% in 2012 to 23.4% in 2015, while newspapers and magazines shrink at an average of 1% a year.* 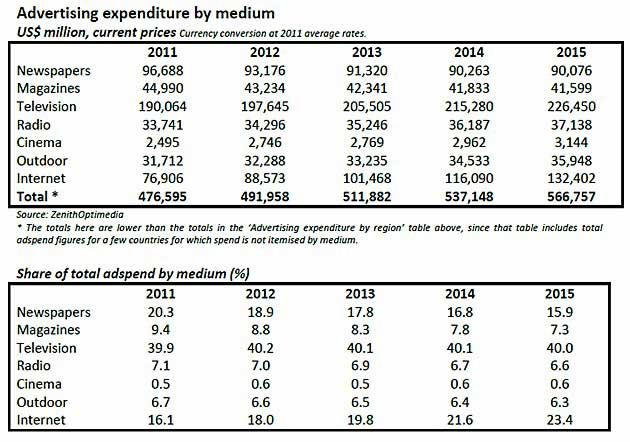 Internet advertising, forecast to overtake newspapers for the first time in 2013, will likely exceed the combined total of newspaper and magazine advertising by 2015.

Other key analysis and forecasts:

*Note: Figures include only advertising in printed editions of these publications, not on their websites, or in tablet editions or mobile apps, all of which are picked up in the Internet category.