Some 400 million Tweets are posted on Twitter every day, and that vast flow of information is beginning to offer public health researchers new and timely insights into the patterns of disease and influenza, according to new research led by Mark Dredze of The Human Language Technology Center of Excellence (HLTCOE) and Department of Computer Science at The Johns Hopkins University.

Moreover, the researchers' real-time method of flu tracking, based on the analysis of 5,000 publicly available tweets per minute, appears to track closely with government disease data that takes much longer to compile, according to Johns Hopkins.

Since May 2009, Johns Hopkins researchers have been monitoring Twitter messages related to about 15 diseases. But they've been closely following flu-related tweets since early 2011.

Using those tweets, the researchers developed two infographics of the United States that illustrate the stark differences between the 2011-2012 mild flu season and the much higher incidence of the virus in the winter of 2012-2013.

The map below shows the Twitter system's rate of influenza in each state in the first week of January 2013 (higher flu rates are marked with darker red), during which the country was awash in a high flu rate: 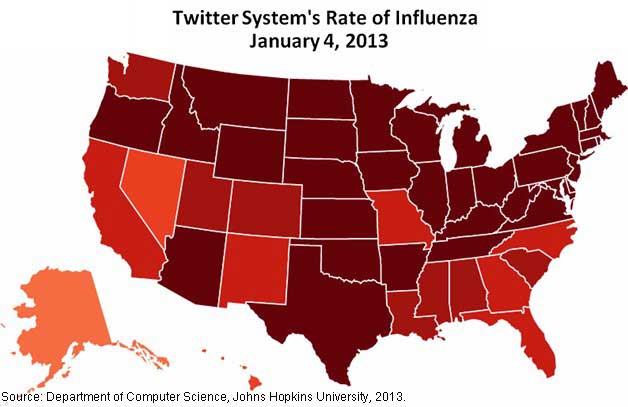 By contrast, during the 2011-2012 flu season, the US was relatively unscathed during the same week: 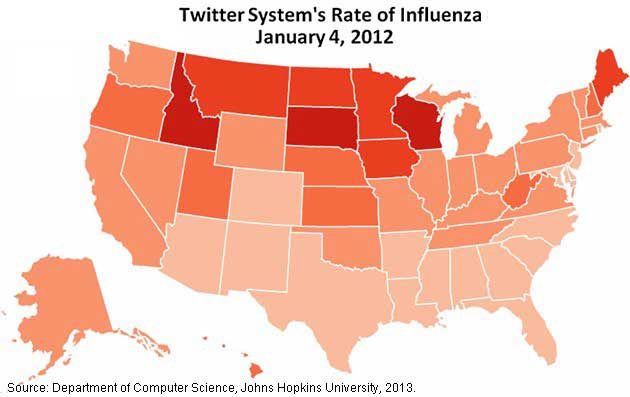 Even so, the research hasn't been without its challenges.

A critical part of the analytical process has been to find a way to differentiate tweets about the flu (e.g., chatter) from those by people who actually have the flu.

For example, finding a tweet that reads "I have the flu" is an ideal data point. With that message, researchers could simply record the date of the tweet and the location of the user, via geo-location analysis.

A Better Technique for Feed Analysis

To address the problem, Johns Hopkins researchers developed a statistical algorithm which examines various aspects of language, including the grammar of tweets, and assigns variables to tweets containing certain features, for example:

"When you look at Twitter posts, you can see people talking about being afraid of catching the flu or asking friends if they should get a flu shot or mentioning a public figure who seems to be ill," said Mark Dredze, assistant research professor in the Department of Computer Science.

"But posts like this don't measure how many people have actually contracted the flu. We wanted to separate hype about the flu from messages from people who truly become ill."

For example, on December 3, 2012, the CDC (Centers for Disease Control and Prevention) issued a press release that warned of increased flu activity and advised people to get vaccinations. After that announcement, flu-related chatter on Twitter skyrocketed. Roughly one month later, the US government released information about the flu. Once again, media buzz (and Twitter chatter) followed, according to researchers.

"In late December, the news media picked up on the flu epidemic, causing a somewhat spurious rise in the rate produced by our Twitter system," Dredze added. "But our new algorithm handles this effect much better than other systems, ignoring the spurious spike in tweets."

Among the roughly 400 million tweets issued daily, researchers extract a data flow of 5,000 tweets per minute. The data is fed into the statistical algorithm in batches, and processed via dozens of computers working simultaneously.

Though tweets are public information, the data is analyzed anonymously.*

Tweets are more effective in the aggregate, according to Dredze. Moreover, individual tweets can be difficult to understand. In the aggregate, the algorithm can decipher vast numbers of tweets in seconds.

A key advantage of the Johns Hopkins flu projection method is that it can produce real-time results.

By contrast, flu analysis conducted by the CDC, which tracks flu-related symptoms via hospital visits, typically takes two weeks to publish, according to the researchers.

Accuracy is also critical. To check the reliability of their enhanced system, the Johns Hopkins researchers compared their results to CDC data for the same period. During November and December 2012, the Twitter system showed a huge improvement in tracking with CDC figures, compared with previous Twitter-based tracking methods, according to the researchers.

Though in its early stages, the Twitter flu research offers potential in other research areas, and in other geographic regions, given Twitter's user penetration outside the US.

"This is an interesting proof-of-concept, but it's really just the tip of the iceberg," said Dredze. There are so many areas in public health where we lack good information. Our hope is that the new technology can be used track other diseases as well."

* Note: The Twitter flu analysis system looked only at public tweets in which all user names and gender information had been removed. In addition, the system was tested only on messages from the United States.

About the data: The research was funded in part by the National Institutes of Health's Models of Infectious Disease Agent Study. Other Johns Hopkins researchers participating in the Twitter flu project are doctoral student Michael Paul and recent bachelor's degree graduate Alex Lamb, both in the Department of Computer Science. The researchers are now working on a formal paper to be released later this year.