Find Me Maybe: 61% Have Taken a Break From Facebook at Some Point

Despite Facebook's dominance among social networking sites, there's considerable fluidity among the Facebook user population, according to a new report by the Pew Research Center.

Two-thirds (67%) of online American adults use Facebook, making it the top social network in the US; but, among those users, 61% say they have at some point voluntarily taken a break from using Facebook for several weeks or more.

Moreover, 20% of online adults who don't use Facebook say they once used the site, but no longer do so.

Below, additional findings from the report titled "Coming and Going on Facebook," issued by the Pew Research Center's Internet and American Life Project, February 5, 2013.

Among Facebook users who've taken a break from using the site, a plurality (21%) cite their busy lives as a reason for having done so. Others point toward a general lack of interest in the site itself (10% mentioned this in one way or another), an absence of compelling content (10%), excessive gossip or "drama" from their friends (9%), or concerns that they were spending too much time on the site (8%): 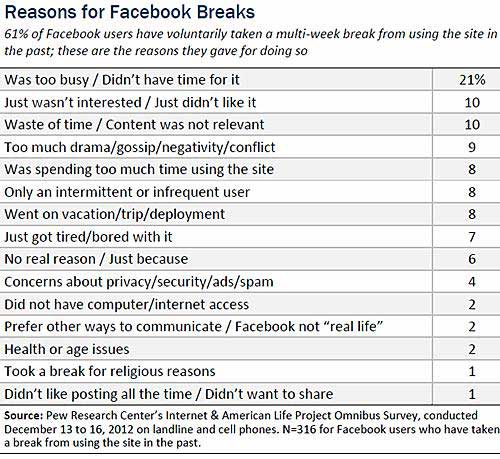 Asked about the amount of time they spend on Facebook and the general value of Facebook in their lives, most users say the site is as important now as it was a year earlier:

However, notable numbers point to a decreasing value and a decline in use over the past year:

Only 12% of Facebook users say the social networking site has become more important to them than a year earlier, and 13% say the amount of time they are spending on Facebook has increased over the past year. 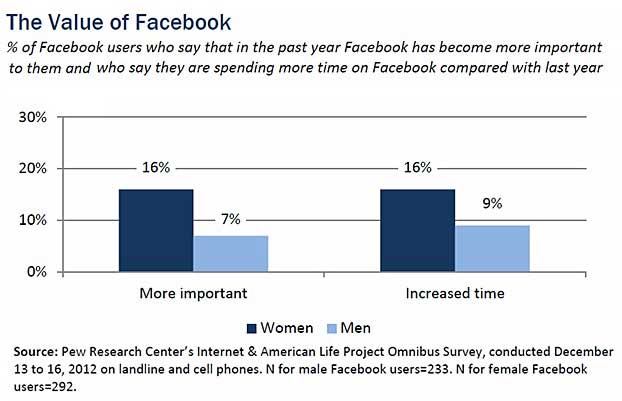 Women are spending more time on Facebook, while older users are the least likely to report spending less time on the site, according to the report.

Women are more likely than men to report increased importance and greater time spent on the site.

Meanwhile, some 42% of Facebook users age 18-29 and 34% of those age 30-49 say that the time they spend on Facebook on a typical day has decreased over the last year. Those levels are both higher than the 23% of users age 50+ who report decreased Facebook use over the same time period.

Plans for Future Use

Young adults are the most likely forecasters of decreased engagement.

Some 38% of Facebook users age 18-29 expect to spend less time using the site in 2013, though most users across age groups expect their Facebook use to remain largely stable in the coming year. 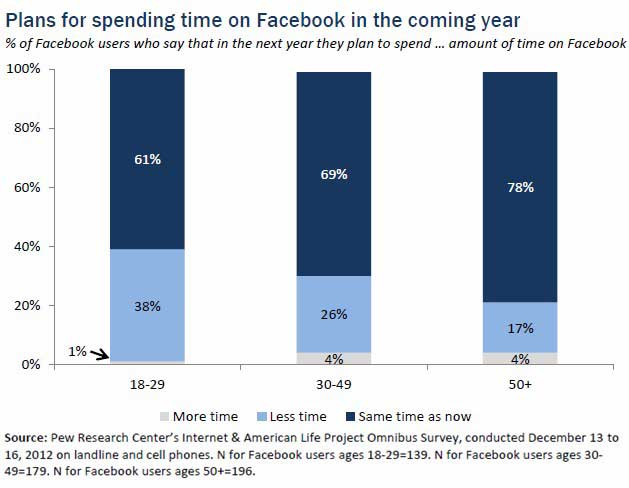 Continue reading "Find Me Maybe: 61% Have Taken a Break From Facebook at Some Point" ... Read the full article