US Trailing W. Europe and Canada in New Media Adoption

Despite its wealth and stronger economic growth, the US is adopting new media technologies —smartphone, tablet, and IPTV (Internet protocol television)—at a slower pace than other countries, according to a new report by ZenithOptimedia.

The US now ranks No. 12 in the adoption of new media technologies and is expected to slip to No. 14 in the rankings by 2015.

Across the 19 geographic markets studied, Western Europe is leading adoption for all three technologies.

Below, other projections issued by ZenithOptimedia.

Norway now ranks first in average penetration of new media devices. However, the Netherlands is expected to be No. 1 by 2015 (driven by heavy IPTV use) up from the No. 3 spot in 2012. Sweden and Denmark also feature in the top 5, reflecting Scandinavia's enthusiasm for the Internet and digital media. 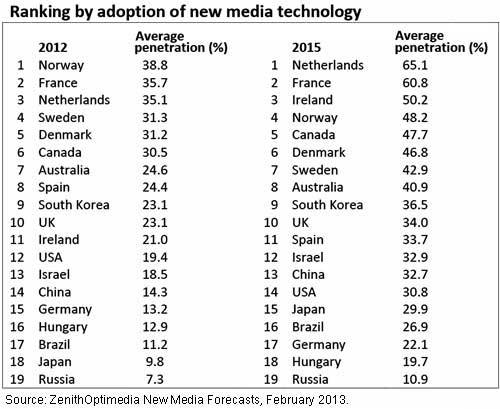