Google Forecast to Earn $5B in Tablet Search Ad Revenue

Ad clicks via tablet devices are projected to account for 20% of Google's paid-search revenues in the US by December 2013, up from 10.7% a year earlier, according to a new report from Marin Software.

That would amount to roughly $5 billion in revenues from tablet ads alone for the year. Overall, Google is expected to earn $9.9 billion in total mobile revenues in 2013, up from an estimated $5.8 billion in 2012.

The strong performance of tablet ads, coupled with a surge in user adoption, is driving the rise in ad investment, according to the report.

Below, additional findings the report titled "Mobile Search Advertising Around the Globe: How Smartphones and Tablets Are Changing Paid Search," by Marin Software. 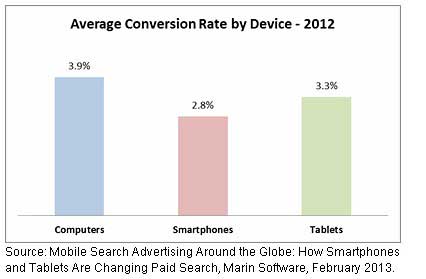 Meanwhile, the effectiveness of Google's tablet search ads are rising. Conversion rates on search clicks via tablet devices increased 31% from January to December 2012 , compared with a 9% rise for smartphones and 7% for computers.

Given such trends, conversion rates for ads via tablets are expected to eclipse those via desktop by the end of 2013, according to the report.

Another positive for advertisers is price: The cost-per-click (CPC) on smartphones and tablets is much lower than it is on desktop computers. 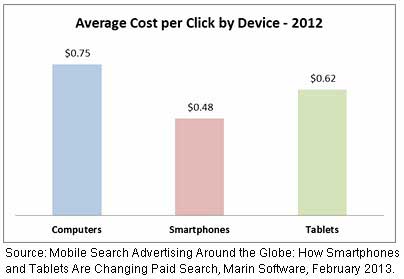 CPCs via tablets and smartphones increased 25% and 13%, respectively during 2012. By contrast, CPCs via computers grew roughly 9%: 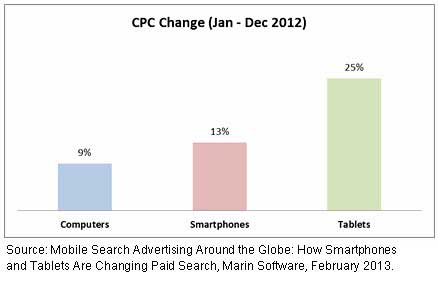 So although smartphones and tablets have lower CPCs, they're increasing at a faster pace, suggesting that tablet CPCs will likely equal desktop CPCs during 2013.

About the report: Findings are based on the analysis of Marin's clients—leading brands and advertisers that manage more than $4 Billion in annualized paid-search spend, representing major industry sectors in Australia, Brazil, Canada, China, the Eurozone, India, Japan, Mexico, New Zealand, Russia, Singapore, the UK and the US.  Importantly, Marin's clients are mainly large advertisers spending upwards of $100,000 per month on paid-search. As such, the information presented is biased towards larger advertisers, and may not reflect mobile search trends for small or medium-sized businesses.