Video viewing via mobile devices (smartphones, tablets, game consoles, etc.) rose dramatically in 2012, accounting for 12% of total video viewing in the fourth quarter, up 10 percentage points from 2% a year earlier, according to an analysis by FreeWheel.

Below, additional findings about non-user-generated video for the fourth quarter of 2012 from FreeWheel, a video monetization company.

Video viewing on devices other than PCs and Macs grew 30% in the final quarter of 2012 alone: 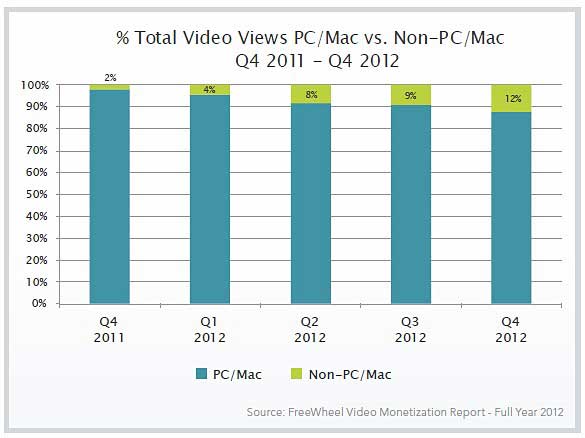 Though video consumption via mobile constitutes is a small proportion of total online viewing, Apple devices dominates mobile viewing—accounting for 60% of all Mac/non-PC viewing in the fourth quarter of 2012. 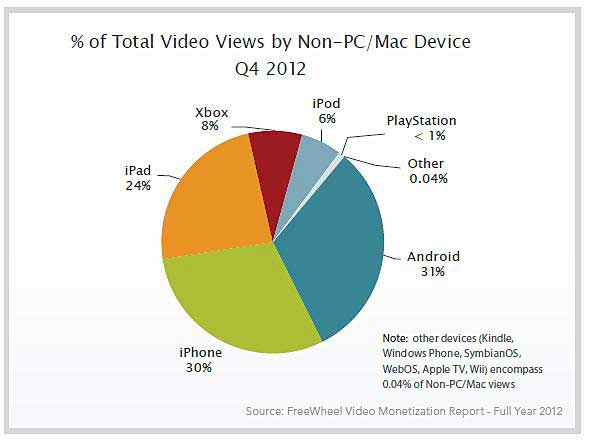 Meanwhile, video viewing via Android devices accounted for 31% of total viewing during the period.

Though Android devices recorded major volume gains in the last two quarters of 2012, the OS only accounts for one-half the viewing via iOS devices. 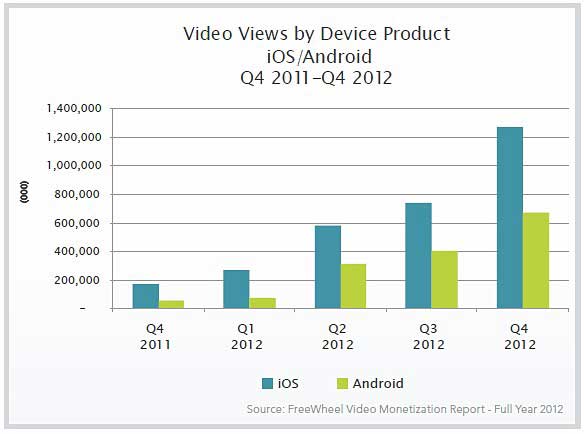 Apple' strong lead is due to its dominance in the tablet market, a space Android has yet to substantially penetrate, according to FreeWheel.

About the data: Findings are based on data from over 13.5 billion video ads (pre-roll, mid-roll, and post-roll) in the fourth quarter of 2012, primarily among US-based activity on behalf of US-based content producers. The data here represents only video that is rights-managed: aggregate monetization data for professional content from FreeWheel's customers, and does not reflect trends for user-generated content.