Google is the most popular Web destination among users of mobile devices, according to new data from Hitwise Mobile: Google attracted 17.27% of total Web traffic via mobile device for the week ended February 23, 2013.

Gmail and Wikipedia rounded out the top five, attracting 1.54% and 1.17%, respectively, of total Web traffic via mobile device. 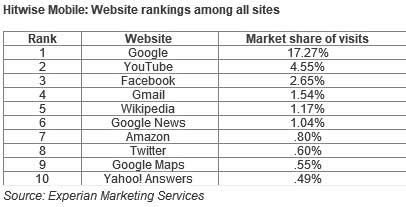 The study, which showcases Experian Marketing Services’ new mobile data offering, Hitwise Mobile, is based on a sample from 3G/4G and Wi-Fi sources, including smartphones and tablets.

Time Spent on Visits via Mobile

Traffic via Desktop vs. Mobile Comparison

The study compared visits from desktop computers vs. those via mobile devices.

For example, in the Sports category, ESPN properties accounted for three of the top five most visited websites overall for the week ended Feb 23. ESPN and ESPN Scorecard were the top two visited sports sites, with Bleacher Report, ESPN NBA, and Yahoo Sports Blogs rounding out the top five sites: 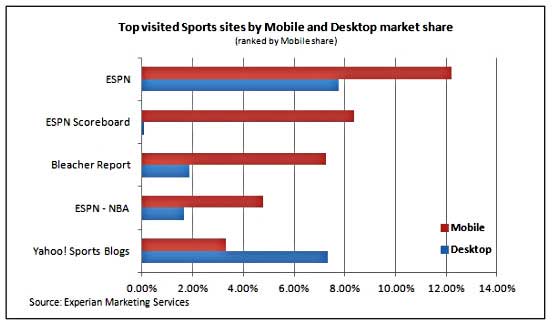 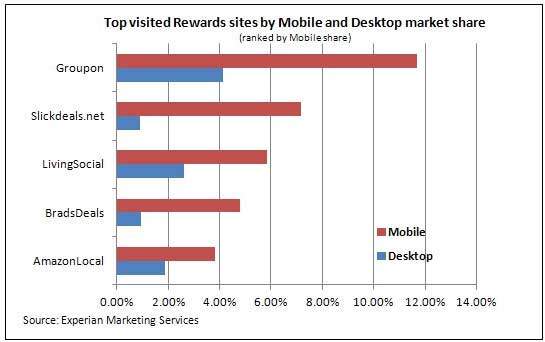 About the data: Rankings data include visits to Websites from mobile devices (including both smartphones and tablets) for the week ended February 23, 2013. Hitwise Mobile tracks metrics across more than 170 categories for more than 4 million mobile sites worldwide.