If time spent online in the US via personal computers were compressed into one hour, 16 minutes of it, or 27%, would be spent on social networking and forums, according to data from Experian Marketing Services.

In the UK, 13 minutes out of every hour online are spent on social networking and forums, whereas in Australia Internet users spend 14 minutes on social sites and forums, Experian said.

In the US, nine minutes out of every hour are spent on entertainment sites, and five minutes on shopping sites, according to the findings from Experian's 2013 Digital Marketer Report. 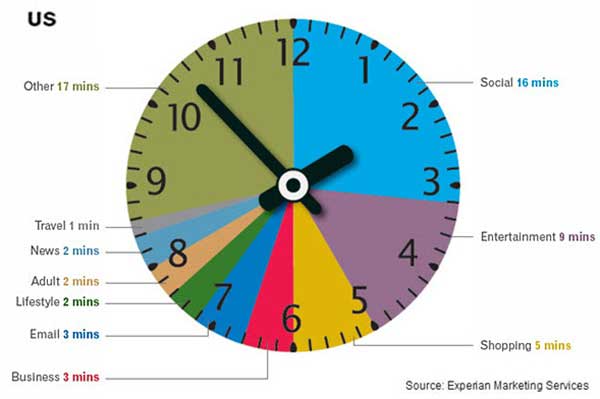 UK vs. US vs. Australia

Though social media takes up a plurality of the time spent online, proportionate to other online activities its share declined across all three regions:

That decline highlights the rise in access via 3G and 4G networks, as consumers spend increasingly more time online while on the move—i.e., via mobile device—Experian said.

Across all three markets, time spent shopping online grew year-over-year, but the UK market emerged as having the most prolific online shoppers.

UK Internet users spent 10% of all time online shopping in 2012, compared with 9% in the US and 6% in Australia—in part due to a bumper Christmas season in the UK, where 370 million hours were spent shopping online, 24% higher than the monthly average.

Consumption of news content also increased across all three markets, with Australian users emerging as the most voracious consumers of news online: 6% of all time spent online in Australia in 2012 was on a news website, compared with 5% in the UK and 4% in the US.

Among the same browsing activities, email accounted for the largest time spent browsing on mobile devices by US in the first quarter of 2013:

The mobile data does not include app usage, but does include mobile browsing within an app, according to Experian Marketing Services.

"Understanding consumer behavior across channels is more important than ever as more visits are being made on the move, particularly among social networking and email," said Bill Tancer, general manager of global research for Experian Marketing Services.

"With smartphones and tablets becoming more powerful, our data clearly indicates the difference between mobile and traditional desktop usage further enabling the 'always on' consumer mentality. Marketers need to understand these differences, as well as regionally, to ensure campaigns can be tailored for better and more effective engagement."