Some 76% of women think sharing photos of kids and pets is acceptable on social media, and 65% want to hear good personal news from their networks. However, 93% believe sharing one's current emotional state is unacceptable, and 83% have no interest in location check-ins, according to a recent report by Ginger Consulting, a branding firm.

The report What Women Want gathered insights on a range of topics from a panel of 400 "alpha women"—identified as consumer influencers and opinion leaders in their peer groups—as well as a nationally representative online survey of "mainstream" women.

How Women Want to Connect

Mainstream women surveyed prefer connecting with friends and family by phone (43%), followed by email/messaging (27%) and texting (20%). Only 4% said they prefer Skype/Facetime, and just 3% favor handwritten letters and cards.

While the alpha group said they are constantly connected on their smartphones, mainstream women are more hesitant about technology and express more concern about bad tech manners. 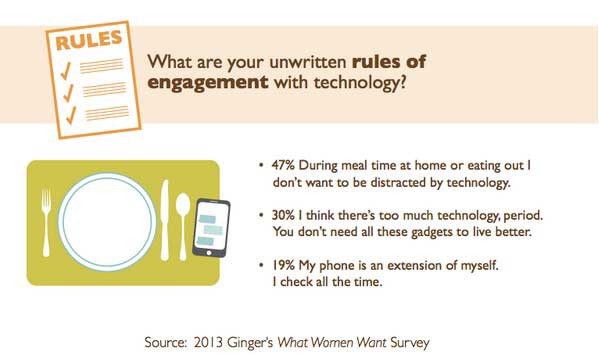 What Women Want in Life

Mainstream women surveyed said they are doing somewhat better financially but are still living on a tighter budget. When asked "What’s the 411 on your personal economic state?", 46% said they're managing but that it's "not fun so being careful," 15% said they're doing very well, and 15% said that their finances had taken a turn for the worse in the past six months.

In terms of budgeting, this year they are prioritizing paying down debt and putting more money into savings. 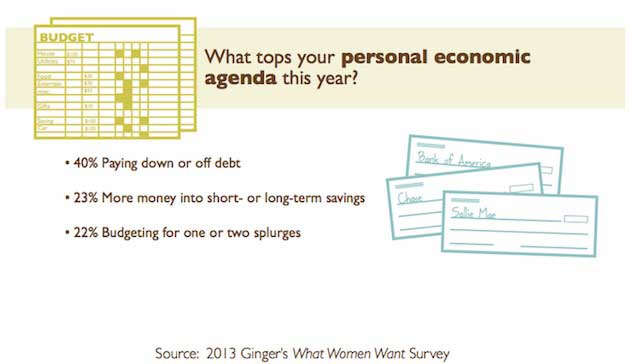 About the research: The report was based on survey results from a panel of 400 "alpha women"—identified as consumer influencers and opinion leaders in their peer groups—as well as a nationally representative online survey of 400 "mainstream" women conducted between March 25 and April 2, 2013.