3 in 4 Say Claims in Ads Are Exaggerated

More than three in four consumers say most of the claims that brands make in advertisements are exaggerated, according to a study by Lab42.

Only 2.8% of consumers surveyed say the claims in various ads are very accurate: 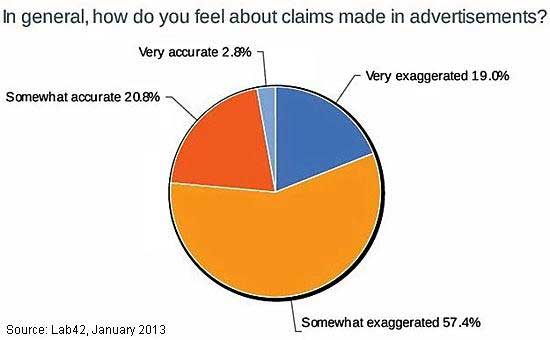 The new study gauges perceptions of popular forms of advertising such as print, television, Internet, and social media.

Below, additional findings from Lab42.

Comsumers have mixed feelings about ads they view as exaggerated:

Perceptions of Ads by Industry

Consumers tend to be more suspicious of ads in certain industries. Below, the five worst-performing industries in terms of ad perceptions:

Consumers understand that ads are often retouched with various digital enhancements. More than 9 in 10 (96.4%) say at least one-half of weight-loss ads are computer-enhanced, and 81.0% say the same about ads related to beauty supplies.

Women appear to be more skeptical of claims made in beauty ads. Though only 3% of all respondents say beauty ads are very accurate, 77% of those are men.

Importantly, not every aspect of advertising is met with skepticism by consumers: 30.6% say there are products you prefer to purchase because you like the product's advertising.

Respondents identified brands such as Target, Pepsi, Coca Cola, Progressive, and Old Spice as those they purchase based on ads they see.

Consumers tend to act on ads when they recognize the brand: 56.8% say they're likely to purchase a new product based on advertising if they already know the brand. Some 43.6% of consumers are motivated by in-store promos, and 35.2% act when ads cause them to react (e.g., laugh about an ad or share it with others).

But brand recognition isn't everything. Despite the prevalence of sponsored posts on social networks today, often from familiar brands, just 6% say they are inclined to try a new product based on this method of advertising.

Ultimately, which kinds of advertisements make lasting impressions? Most (71.2%) consumers cite "funny" ads, with 56% of those respondents being women.

Some 11.6% of consumers say they're most likely to remember educational ads, and 7.8% say they remember sexy ads.

About the data: Findings are based on a survey of 500 consumers (half of them women) age 18-64 who work in a broad range of industries and with a broad range of educational backgrounds and income levels. The survey was conducted in the fourth quarter of 2012. Some 49% of respondents were married.

Continue reading "3 in 4 Say Claims in Ads Are Exaggerated" ... Read the full article