From smartphone makers embroiled in copyright battles to stores offering Black-Friday bargains, from investment banks at the center of public scandals to popular Super-Bowl commercials, some brands generated more Twitter buzz than others in 2012—for good and bad reasons—according to data from Topsy.

The new study ranks the share of voice on Twitter for top brands across 12 industries: media and entertainment; finance; retail; telecom; quick-service restaurants; health; auto; nonprofits; alcohol; travel; tech; and consumer goods. The report also shows spikes in Twitter activity during the year for each of the brands.

For the ranking, Topsy calculated a "sentiment score" by analyzing roughly 200 million English-language tweets for each day of 2012, computing minute-by-minute sentiment for every term in every tweet, and creating an index for all terms (ranging from 0 (negative) to 100 (positive), with 50 as neutral.

Below, the top brands across various industries.

Disney was the top brand in media and entertainment industry in 2012, registering a sentiment score of 82.9. The Discovery Channel ranked second with 75.7, followed by HBO with 75.4. MTV was No. 4 (75.3), driven in part by chatter about the MTV video music awards in September: 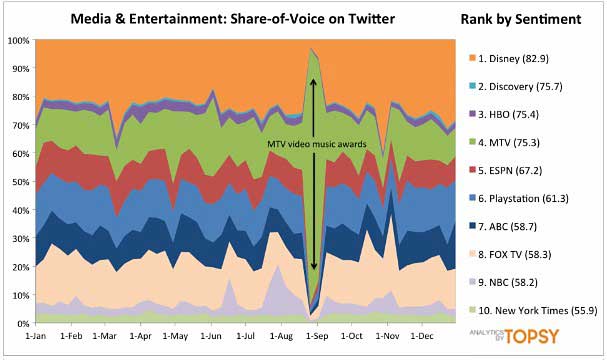 American Express came out on top among financial brands, with an average sentiment score of 89.4 for the year. Visa and Mastercard followed with 83.6 and 71.2, respectively. In terms of chatter volume, when Goldman Sachs executive Greg Smith resigned in March, posting a public account of his resignation for the New York Times, tweets about Goldman Sachs spiked significantly. In addition, talk surrounding British bank HSBC grew quickly in both July and December, when the bank was under fire for money laundering allegations: 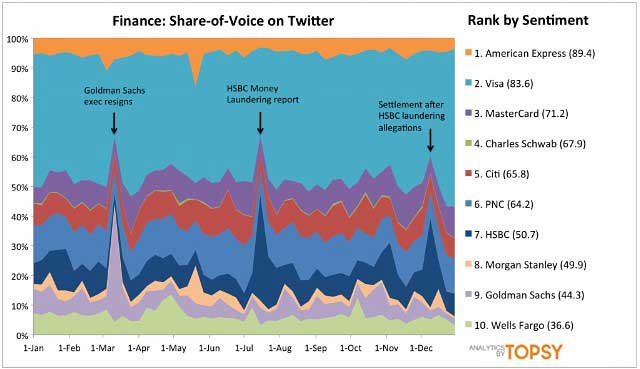 Though online market giants eBay and Amazon took the top two slots for sentiment score (88.7 and 77.7, respectively), the most significant spikes in chatter involved Apple (70.6). When Apple stock topped $600 a share in March, Twitter was abuzz with opinions and hopes for the tech company's future. In addition, the social Web lit up with more Apple discussion in August and September, when Apple won its copyright battle against competitor Samsung: 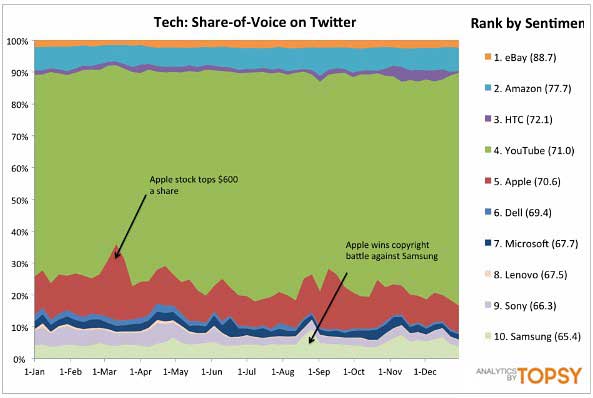 Which common products were Twitter users buying this year? Beauty products by Covergirl (89.4) and L'Oreal (87.4) scored the highest sentiment scores, followed by Pillsbury (a branch of General Mills/Smuckers) (85.4). Pepsi was a popular topic of conversation after running a TV commercial during the Super Bowl in February, and its and once again when it aired its One Direction spot with Drew Brees in October: 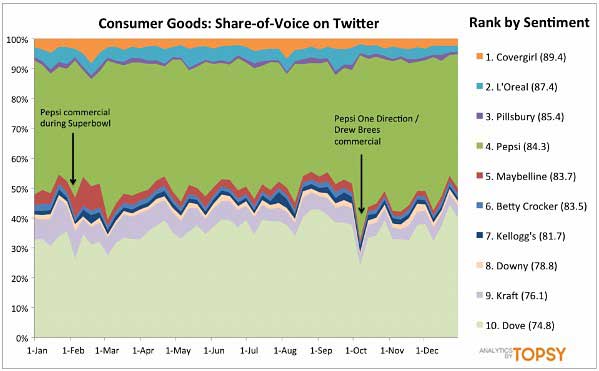 Best Buy, a top tech-gadget seller, had the highest Retail sentiment score on Twitter (97.2), followed by Lowes (85.2) and Costco (84.9). Large spikes in Twitter chatter were recorded by Walmart, Best Buy, and Macy's on Black Friday (Nov. 22): 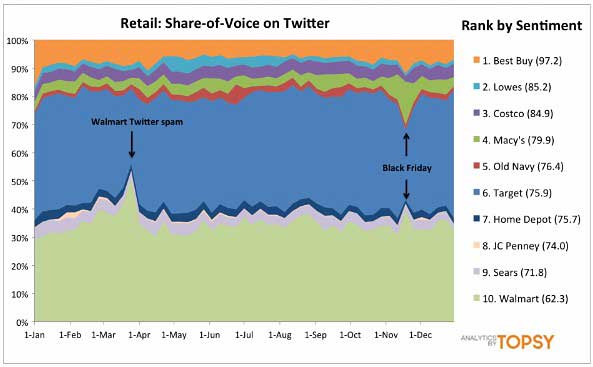 About the data: To compute the sentiment score, Topsy analyzed roughly 200 million English-language tweets each day, computed minute-by-minute sentiment for every term in every tweet, and created scaled scores for all terms. The scores range from 0 (negative) to 100 (positive), with 50 as neutral.

Continue reading "The Hottest Brands on Twitter in 2012" ... Read the full article