The Future of Online Video Marketing

Media companies and advertisers are bullish about the rise of online video, with the majority of publishers predicting higher future CPMs and most advertisers envisioning greater spend effectiveness, according to "Optimism Despite Unresolved Issues About Video Advertising," a December 2013 commissioned study conducted by Forrester Consulting on behalf of Videology.

However, despite this general optimism, advertisers, agencies, and media companies differ on the benefits of online video and exactly how the medium will evolve over the next few years.

For example, respondents from media companies and agencies are optimistic about TV viewers' interacting with supplemental content on a second screen, whereas advertisers are skeptical, especially about the likelihood of consumers' engaging with ad-related offerings.

Another gap is apparent in describing the advantages of online video: Advertisers say they are attracted by the promise of targeting and better communication, whereas their agencies see a greater benefit in the medium's interactivity and improved audience attention rates. 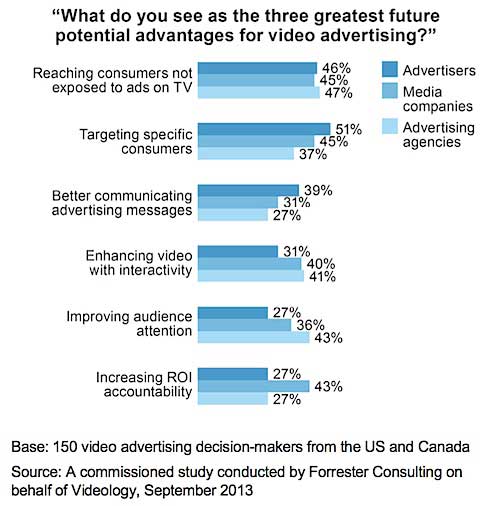 Overall, large majorities of respondents across all three groups say video viewing will continue to shift to streaming sources, but media companies and agencies see a major move to Web-based viewing whereas advertisers are more optimistic about on-demand services from cable and satellite providers. 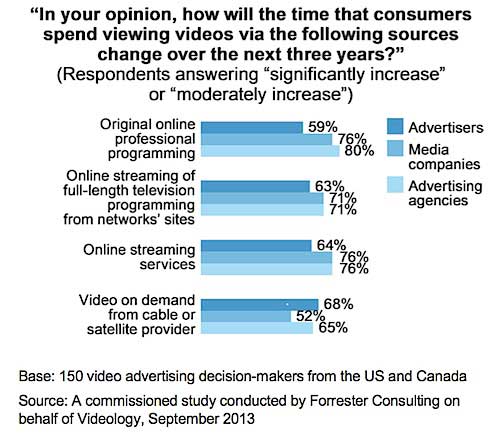 Below, additional key findings from the study, which was based on data from a survey of 150 US and Canadian decision-makers at media companies, advertisers, and advertising agencies.

About the research: The study was based on data from a survey conducted in September 2013 of 150 North American advertising decision-makers at media companies, advertisers, and advertising agencies.