How to Win Back Inactive Email Subscribers

What are the best ways to re-engage inactive email subscribers? Take the time to show them you care or offer them a fixed discount, according to a recent report from Return Path.

The analysis of 33 win-back campaigns by retailers found that reactivation emails with the words "miss you" and "come back" in their subject lines had higher read rates (13% and 12.7%, respectively) than emails offering standard percent-off discounts (11%).

Fixed-amount ($ off) discount emails had the highest read rate of any win-back tactic examined (21%), yet they were sent far less often than percent-off emails.

Re-permission emails, where the sender attempted to get long inactive recipients to opt into receiving emails again, were found to be ineffective, with only a 1.8% average read rate.

Below, additional key findings from the report, which was based on data from 300 million emails sent to 100 million subscribers. 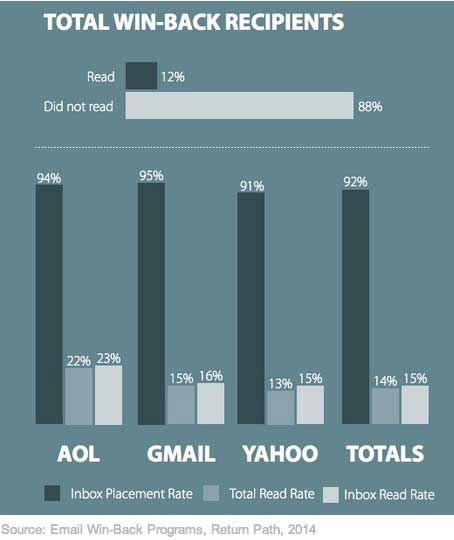 About the research: The report was based on data from 300 million emails sent by retailers as part of 33 win-back campaigns conducted between April 1, 2013 and January 31, 2014.

Continue reading "How to Win Back Inactive Email Subscribers" ... Read the full article