How to Reach World Cup Fans Without a Big Marketing Spend

Marketers seeking to reach the World Cup audience without paying for an expensive campaign have effective alternatives, according to a recent report from Networked Insights.

The company examined more than 5 billion tweets to find 575,000 active fans in the United States, then analyzed that audience to identify insights that could be of use to marketers looking to reach fans without spending directly on official sponsorships or soccer media.

World Cup fans over-index across various interests; that is, they are significantly more likely to engage with certain topics compared with the baseline US consumer:

Advertisers looking to reach the US World Cup audience via digital media outlets without going directly to sports publishers have various options:

Marketers looking to invest in local campaigns should keep in mind that interest in the World Cup varies significantly by US metropolitan region: 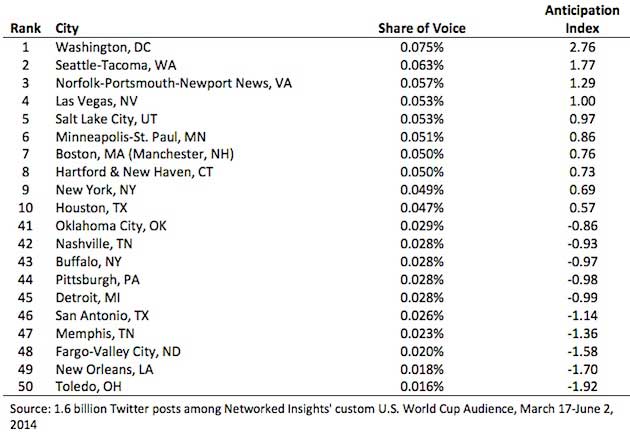 About the research: The report was based on an analysis of 5 billion tweets from more than 575,000 active World Cup fans in the United States.