Consumers are still converting at a higher rate on desktops than on mobile devices, according to a recent report from Marin Software.

The report was based on 3Q14 data from advertisers and agencies that invest in excess of $1 million annually on paid search, social, and display advertising channels.

Average conversion rates in the quarter were higher on desktops than on mobile devices for all three channels (search, social, and display), the analysis found.

That gap was due to a range of factors, including the following: mobile behavior, such as using a smartphone for research or an in-store visit; the relative ease of converting on desktop compared with mobile devices; and the continuing challenge of attributing mobile conversions. 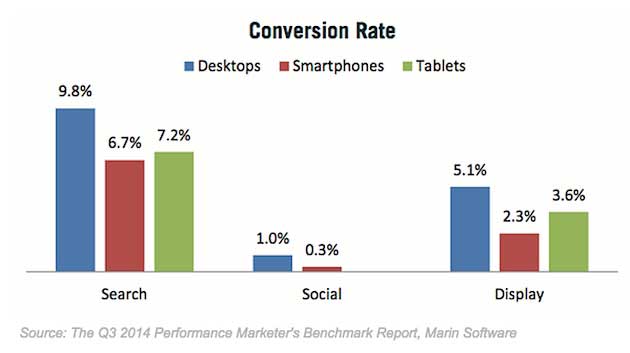 Search stood out as the clear leader in average click-through rate across all devices when compared with social and display channels:

The cost per click (CPC) 3Q13 data closely mirrored the conversion rate data: Desktops had the highest CPCs for search, social, and display, with mobile devices having lower CPCs.

Search CPCs were much higher than those of social and display, on average, meaning that advertisers could buy more clicks for the same amount of spend on non-search channels: 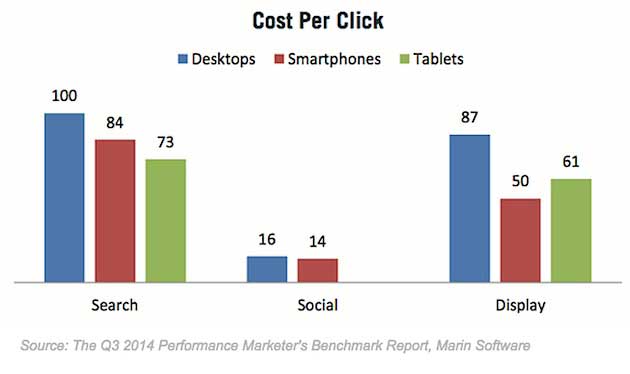 About the research: The report was based on 3Q14 data from advertisers and agencies that invest in excess of $1 million annually on paid search, social, and display advertising channels.