The Most Wanted Holiday Gifts According to Social Media

What do people want most for the holidays this year? Good ol' cash, according to a recent report from Prime Visibility.

The report was based on data from millions of conversations about holiday gifts occurring on Facebook, Twitter, and forum communities.

The top three most wanted gifts of 2014—cash, gift cards, and iPhones—are the exact same as those of 2013, the analysis found.

However, the number four spot is significantly different, changing from Justin Bieber tickets last year to drones this year.

Rounding out the list of the top 10 most wanted gifts are shoes, clothing, nothing, the Xbox 360, puppies, and wine. 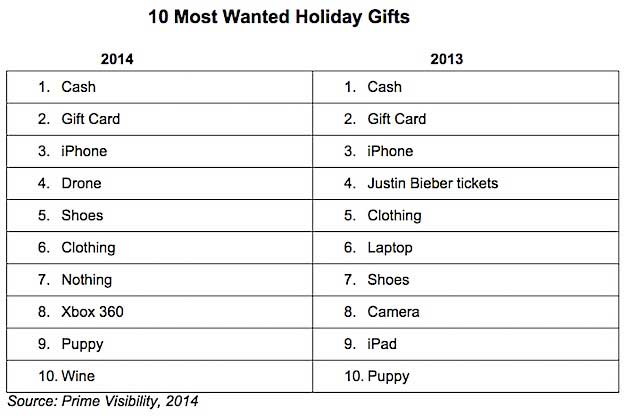 Guardians of the Galaxy is the most wanted movie this holiday season, followed by Frozen and The Fault in Our Stars.

American Horror Story is the most desired TV show, followed by The Big Bang Theory and The Walking Dead.

In electronics, iPhones rule—taking both the first and second spots—followed by drones and laptops. 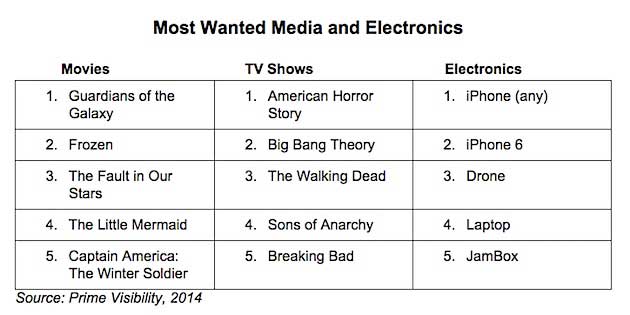 About the research: The report was based on data from millions of conversations about holiday gifts that occured on Facebook, Twitter, and forum communities.

Continue reading "The Most Wanted Holiday Gifts According to Social Media" ... Read the full article