Online retailers saw a big boost on Thanksgiving 2014 in paid search and paid social performance compared with 2013, according to a recent report from Kenshoo.

The report was based on 2014 and 2013 holiday season (November and December) data for global retailers in all major categories, including more than 60 billion paid impressions and clicks in search and social channels. 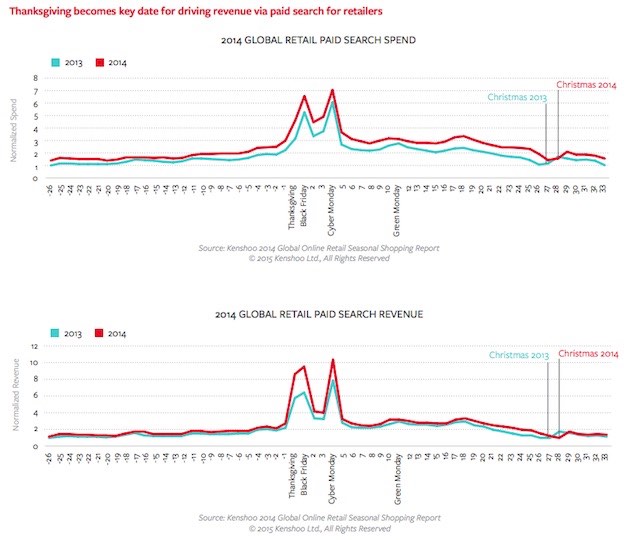 Consumers started to engage with retailers much earlier than in the past this holiday season, with click-through rates on paid search ads beginning to rise almost 10 days before Thanksgiving, according to the analysis.

Black Friday and Cyber Monday have had the highest engagement of the holiday shopping season for online retailers in past years; however, in 2014, Thanksgiving generated the highest CTR, the analysis found.

CTRs on paid social ads jumped 701% in 2014 from 2013 levels, thanks largely to Facebook's migration of ads to the News Feed.

About the research: The report was based on 2014 and 2013 holiday season (November and December) data for global retailers in all major categories, including more than 60 billion paid impressions and clicks in search and social channels.