The 10 Most Popular Brands Online

Google was the most popular brand online in 2014, ranking first for the second year in a row, according to a recent report from Infegy.

The report was based on data from billions of online conversations that occurred last year about 800 top brands. The top 50 brands were then ranked based on a combination of popularity (volume of conversations) and sentiment (how positive the conversations were).

Google claimed the top spot thanks to the high volume of conversations about the brand (718 million posts) as well as the generally positive sentiment of those interactions (69% were positive). Twitter ranked second, followed by Facebook.

Online chatter about Apple (No. 4) spiked in September and October, during the launch of the iPhone 6. However, total conversations about the brand were down 32% from 2013.

Below are the rankings for the top 10 brands. To see the top 50, check out the full list. 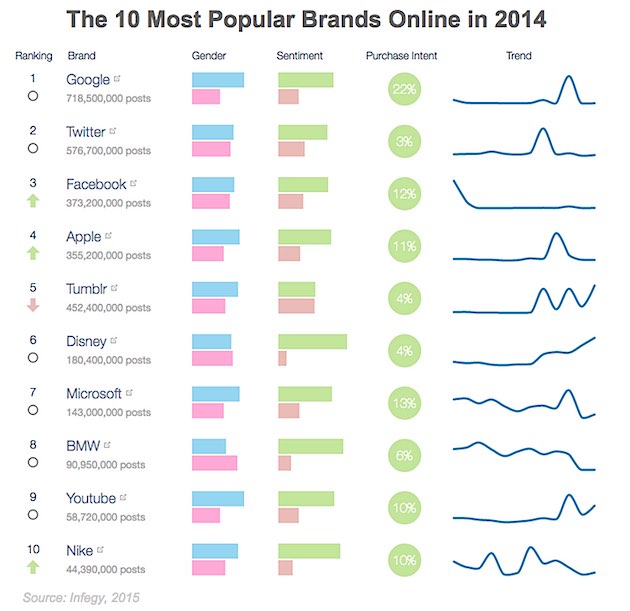 About the research: The report was based on data from billions of online conversations last year about 800 top brands. The researchers used the Infegy Atlas analytics platform to determine which brands people were talking about most, the overall positivity and negativity surrounding each brand, and levels of positive purchase intent. The top 50 brands were then ranked based on a combination of popularity (volume of conversations) and sentiment (how positive the conversations were).