Some 83% of brands sent general winter-holiday-themed emails last year, and 80% sent Black Friday emails, according to a recent report from Yesmail.

The report was based on data from email marketing campaigns sent by 30 major B2C brands in the third and fourth quarters of 2014. The researchers used terms such as "school," "Halloween," "Thanksgiving," "Black Friday," "holiday," and "Christmas" to identify emails focused on specific holidays/events, measure their performance, and compare them with base marketing campaigns for the same period.

After the winter holiday season and Black Friday, Cyber Monday was the most popular holiday/event for sending emails in 3Q14 and 4Q14 (67% of the brands examined sent), followed by Back to School (60%), and Christmas (60%).

Although the brands examined sent 46% more emails between 3Q14 and 4Q14, the average open rate stayed about the same (14.7% and 14.6%, respectively), indicating that consumers were able to fairly easily cope with the increased holiday inbox volume. 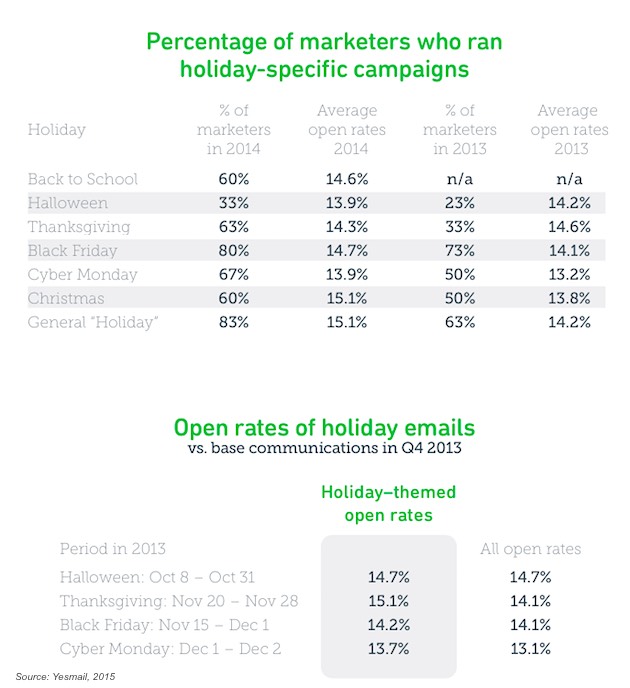 Back-to-school campaigns were deployed as early as July 1 in 2014. However, open rates for those early campaigns were lower than those of base (non-themed) campaigns.

Campaigns that ran closer to the start of school garnered significantly better open rates (32% higher than back-to-school emails deployed a month earlier), outperforming base communications during the same time frame.

Thanksgiving and Black Friday campaigns deployed directly leading up to those dates saw higher open rates compared with those deployed further in advance. 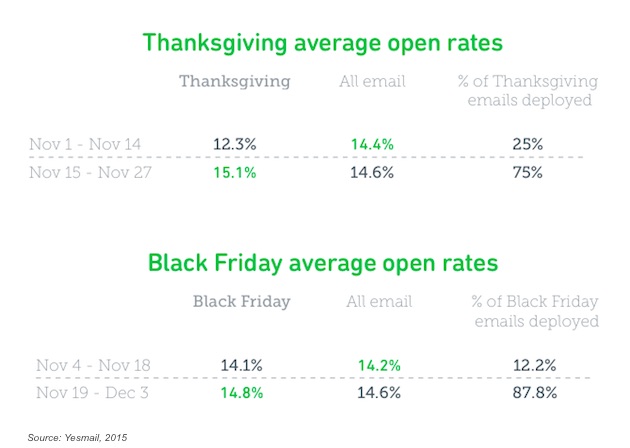 General holiday campaigns (defined in the report as emails that referenced the holiday or winter season without specifying a particular holiday) started 10 days earlier in 4Q14 than in 4Q13.

In the earlier weeks of the winter holiday season, open rates for these emails were comparable to those of base communications; as the year drew to an end, open rates increased. 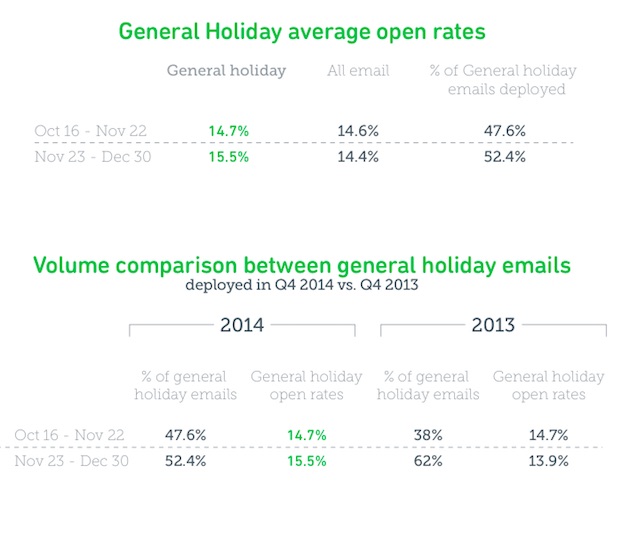 About the research: The report was based on data from email marketing campaigns sent by 30 major B2C brands in the third and fourth quarters of 2014.